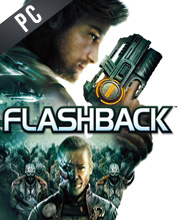 What is Flashback CD key?

It's a digital key that allows you to download Flashback directly to PC from the official Platforms.

How can I find the best prices for Flashback CD keys?

Allkeyshop.com compares the cheapest prices of Flashback on the digital downloads market to find the best sales and discount codes on trusted stores.

Flashback is a action RPG developed by VectorCell and published by Ubisoft.

Trying to escape from Cyborgs you crash your jet bike and awaken in the jungle of titan. You will be following a series of events that will eventually leave the fate of the human race in your hands.

A remake of the original game released by Delphine Software in 1992 this version mirrors the original in many regards. There have been many changes in the game as the years have allowed us to improve graphics and abilities of the characters. Fans of the original will delight in this re-envisioned release, being able to share with new players and bring back a sense of nostalgia from the games of our youth.