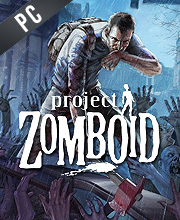 What is Project Zomboid CD key?

It's a digital key that allows you to download Project Zomboid directly to PC from the official Platforms.

How can I find the best prices for Project Zomboid CD keys?

Allkeyshop.com compares the cheapest prices of Project Zomboid on the digital downloads market to find the best sales and discount codes on trusted stores.

Project Zomboid is an indie, RPG, simulation videogame in alpha stage development by independent developer The Indie Stone. The game is set in a post apocalyptic, zombie infested world where the player is challenged to survive for as long as possible before ultimately dying. Survival is not an option.

Set in the towns of Muldraugh and West Point, survivors must loot houses, build defenses and do their utmost to delay their inevitable death day by day. No help is coming – their continued survival relies on their own cunning, luck and ability to evade a relentless horde.

Project Zomboid put a lot of effort to the success of the game. It proves to be a great zombie survival game and includes a challenging basis to it adding to how realistic the game is. Looting, crafting, fighting, it’s all good. Even fleeing is fun. Highly recommended!

GOG.COM CD KEY : You need to register on Gog.com, then use the GOG Key to download and activate your game to play Project Zomboid.
EUROPEAN STEAM GIFT : It’s a steam gift for Europe which requires an European IP address to activate and to play Project Zomboid on Steam. Read carefully the store description about region and language restrictions.
STEAM GIFT : A Steam gift is a one-time transfer you receive. You activate and install Project Zomboid to play on Steam, it is a non-refundable game that stays in your Steam games collection. Please read the store description about any language or region restrictions.
STEAM CD KEY : Use the Steam Key Code on Steam Platform to download and play Project Zomboid. You must login to your Steam Account or create one for free. Download the (Steam Client HERE). Then once you login, click Add a Game (located in the bottom Left corner) -> Activate a Product on Steam. There type in your CD Key and the game will be activated and added to your Steam account game library.
Early Access
Standard Edition

Best zombie simulator. Too bad the development is really slow but even now it has an awesome gameplay!