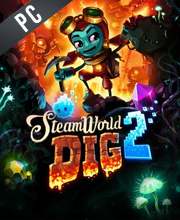 What is SteamWorld Dig 2 CD key?

It's a digital key that allows you to download SteamWorld Dig 2 directly to PC from the official Platforms.

How can I find the best prices for SteamWorld Dig 2 CD keys?

Allkeyshop.com compares the cheapest prices of SteamWorld Dig 2 on the digital downloads market to find the best sales and discount codes on trusted stores.

SteamWorld Dig 2 is a Metroidvania-inspired platform mining adventure. When unexplained earthquakes strike an old trading town, it’s up to a lone steambot and her odd companion to figure out what quivering terrors lay beneath.

SteamWorld Dig 2 is everything that’s expected from a good sequel. The gameplay loop is just as engaging as before, but there are some much nicer tools this time around. The levels may no longer be randomly generated, but the hand-crafted ones are smart and still provide exciting gameplay scenarios. The game also comes in at a perfect length, and while some will lament the scarcity of things to do once the adventure is over, few will deny that it was time well spent. SteamWorld Dig 2 is another awesome entry in the SteamWorld series, and it’s a game that’s worth checking out.

I adored Heist and didn’t really play much of the first Dig, but I now consider myself a fan of the SteamWorld canon. Image & Form is doing great work with this universe, and I wouldn’t want to miss this sequel. Even if you’re going from Metroid: Samus Returns, which is similar, directly into Dig 2, I still think you’ll come away thrilled and looking in the developer’s direction hoping they have something else new coming very soon.

The Complete Bundle contains the base game and the following features:

Zoom 1m 3m 1y All
Track product
GOG.COM CD KEY : You need to register on Gog.com, then use the GOG Key to download and activate your game to play SteamWorld Dig 2.
PUBLISHER WEBSITE CD KEY: Use the CD Key Code to download directly on the Official Website or from the store to play SteamWorld Dig 2. Follow the instructions given by the store. Verify languages available and possible region restrictions before buying.
EU STEAM CD KEY: Requires an EUROPEAN IP address or you must activate it with a VPN (Virtual Private Network) in order to play SteamWorld Dig 2. Might have languages restrictions or language packs. Read the description on the store game page to know if the EU IP is only needed for activation or for playing also (maybe on EU Servers). Most of the stores offer you their help, or show you how to do this with a tutorial to follow.
EUROPEAN STEAM GIFT : It’s a steam gift for Europe which requires an European IP address to activate and to play SteamWorld Dig 2 on Steam. Read carefully the store description about region and language restrictions.
STEAM CD KEY : Use the Steam Key Code on Steam Platform to download and play SteamWorld Dig 2. You must login to your Steam Account or create one for free. Download the (Steam Client HERE). Then once you login, click Add a Game (located in the bottom Left corner) -> Activate a Product on Steam. There type in your CD Key and the game will be activated and added to your Steam account game library.
STEAM KEY ROW : It means for Rest Of the World countries which are not concerned by the region restrictions. This product can't be purchased and activated in Several countries. Please read the store description to know the full list of countries which are concerned. Use the key to Download and play SteamWorld Dig 2 on Steam.
PC Win 10 / Xbox Key. Digital code which allows you to play on both Xbox and Windows 10 PC. See below for more informations.
Complete Bundle
Standard Edition
Compare Choose & Buy Download (743)