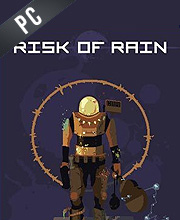 What is Risk of Rain CD key?

It's a digital key that allows you to download Risk of Rain directly to PC from the official Platforms.

How can I find the best prices for Risk of Rain CD keys?

Allkeyshop.com compares the cheapest prices of Risk of Rain on the digital downloads market to find the best sales and discount codes on trusted stores.

Risk of Rain is an indie action RPG platform video game developed by Hoopoo Games and published by Chucklefish Ltd.

The game is set in the distant future where space transportation is very common. These space vehicles transport passengers as well as goods. Your character is one of the many who uses this type of transportation. Due to unexpected events, the space vehicle you are riding on had problems and crashed in a mysterious planet with only one survivor – you.

Risk of Rain is a multi-player game where the goal is to find a portal to get to the next level and eventually get home. To start, you need to select one of the twelve characters available. As you complete various game objectives, more and more characters will become available. Each game character has its own statics and unique specialties.

As the player gains experience through game progress, it will also increase the level of your characters, which makes them stronger ever than before. In this game, you can open various chests and buy items at stores. These items give you bonuses that improve the offensive and defensive capabilities of your character, or a special weapon that can be used to attack a special target.

In the duration of the game, players will find portals. Once found, players will have to activate the portal and a 90-second countdown will start. Before they can enter the portal and get to the next level, monsters and a boss character will appear and you must survive and defeat them all.

After the 90 seconds in up, the monsters will stop coming out of the portal, but you have to defeat all the remaining monsters left. The portals will allow the players to travel from one dimension to another and get to the final level. At the final level, the players must defeat the boss character for them to escape the planet and win the game.

Zoom 1m 3m 1y All
Track product
GOG.COM CD KEY : You need to register on Gog.com, then use the GOG Key to download and activate your game to play Risk of Rain.
EU STEAM CD KEY: Requires an EUROPEAN IP address or you must activate it with a VPN (Virtual Private Network) in order to play Risk of Rain. Might have languages restrictions or language packs. Read the description on the store game page to know if the EU IP is only needed for activation or for playing also (maybe on EU Servers). Most of the stores offer you their help, or show you how to do this with a tutorial to follow.
EUROPEAN STEAM GIFT : It’s a steam gift for Europe which requires an European IP address to activate and to play Risk of Rain on Steam. Read carefully the store description about region and language restrictions.
STEAM GIFT : A Steam gift is a one-time transfer you receive. You activate and install Risk of Rain to play on Steam, it is a non-refundable game that stays in your Steam games collection. Please read the store description about any language or region restrictions.
STEAM CD KEY : Use the Steam Key Code on Steam Platform to download and play Risk of Rain. You must login to your Steam Account or create one for free. Download the (Steam Client HERE). Then once you login, click Add a Game (located in the bottom Left corner) -> Activate a Product on Steam. There type in your CD Key and the game will be activated and added to your Steam account game library.
Pack X4
Standard Edition
Compare Choose & Buy Download (743)