The Steam Awards 2016 Voting Opens! Here Are the Nominees! 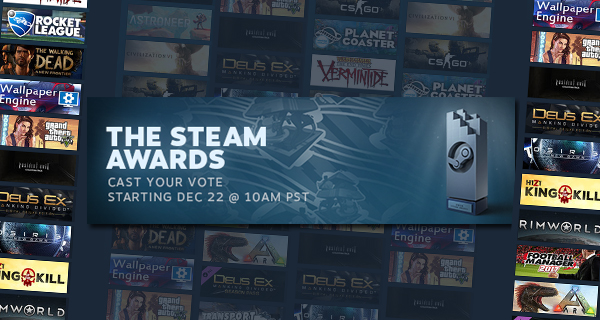 Steam has finally revealed the games that made it into the list of nominees for the Steam Awards 2016! You can definitely be part of this initiative by voting for your favorite game!

Voting starts December 22nd and will run until December 30th. Each day, voting for one category will open and will close after 24 hours. Voting for the next category follows afterwards. Winners will then be announced on New Year’s Eve.

Wanna know which games were nominated? Here’s the official list from Steam which also includes the corresponding voting schedule.

Which of these games do you think will win? Let’s take a look at your list in the comments! 🙂

December 23rd 10 AM PST The “I Thought This Game Was Cool Before It Won An Award” Award – This title didn’t have a huge marketing machine behind it, but you found it and loved it. Then you told your friends about it. And they loved it. And now that little game that could is about to win an award… but always remember: you totally found it first. –Euro Truck Simulator 2 -Paladins –Starbound –Stardew Valley -Unturned December 24th 10 AM PST The “Test of Time” Award – This award is for the game that is just as good today as the day you first played it. Newer games may come out, but it doesn’t matter… you’ll always come back to play this one. –Age of Empires II HD –The Elder Scrolls V: Skyrim –Sid Meier’s Civilization V -Team Fortress 2 –Terraria December 25th 10 AM PST The “Just 5 More Minutes” Award – You have an early day tomorrow. You need to get some sleep, so you’re just going finish one more thing before you decide to tuck in for the night. Just one more. Wait, one more. What’s that you say? It’s 2:30 AM? This award is for the game that keeps you playing late. –Counter-Strike: Global Offensive –Rocket League –Sid Meier’s Civilization VI –Fallout 4 -Terraria December 26th 10 AM PST The “Whoooaaaaaaa, dude!” Award – Some games melt your face. Maybe it was a crazy plot twist. Maybe you just got your wisdom teeth removed. Either way, this game BLOWS YOUR MIND. –Bioshock Infinite –DOOM –Grand Theft Auto V –Metal Gear Solid V: The Phantom Pain –The Witcher 3: Wild Hunt December 27th 10 AM PST The “Game Within A Game Award” Award – Kinder Eggs. Peanut Butter Cups. Jelly Donuts. All great things stuffed with other great things. Like a mighty turducken, this award celebrates the best mini game hidden within another game. –Garry’s Mod -Grand Theft Auto V –The Stanley Parable –Tabletop Simulator -The Witcher 3: Wild Hunt December 28th 10 AM PST The “I’m Not Crying, There’s Something In My Eye” Award – Games are fun. But sometimes games become more than that, and touch you in a way you weren’t expecting. This award celebrates the game that blindsided you emotionally. You weren’t expecting to cry. It wasn’t in the plan. But it happened nonetheless. –Life Is Strange –To the Moon –This War of Mine –Undertale –The Walking Dead December 29th 10 AM PST The “Best Use Of A Farm Animal” Award – Animals are rad and almost any game is better for including them. This game used a farm animal in the best way possible. –ARK: Survival Evolved –Blood and Bacon –Farming Simulator 17 –Goat Simulator -Stardew Valley December 30th 10 AM PST

The “Boom Boom” Award – Let’s face it: explosions are pretty great. In a blockbuster movie they’re thrilling. In a celebration with fireworks they’re beautiful. And when they’re behind a cop putting on sunglasses they’re nothing short of glorious. These games understand the fine art of detonation. –BroForce -DOOM –Just Cause 3 –Keep Talking and Nobody Explodes –Kerbal Space Program

The “Love/Hate Relationship” Award – “Games are just supposed to be fun!”… oh sweet summer child, your naivety is adorable. Games can be more than fun. They can be challenges that demand perfection. These games are punishing gauntlets that make you question your very skill… a crucible that will push you either to greatness or a breaking point. You will wake up family members as you scream. Words will come out of your mouth that would make your mom blush. Your chill friends will ask you, “Why do you play something that stresses you out?”… and you will stare at them with steely eyes and reply, “Because I love it.” –Dark Souls III –Darkest Dungeon -Dota 2 –Geometry Dash –Super Meat Boy The “Sit Back and Relax” Award – Did you read the description for the “Love/Hate Relationship” Award? This is the opposite. –ABZU –Cities Skylines -Euro Truck Simulator 2 –Mini Metro -Viridi The “Better With Friends” Award – There are some games out there that just aren’t the same when you play by yourself. Maybe you need to have a friend to watch your back. Maybe you need to have a friend that you can stab in the back. Either way, mirth is awaiting those that gather friends to play these games. –Don’t Starve Together –Gang Beasts –Golf With Your Friends –Left 4 Dead 2 –Magicka