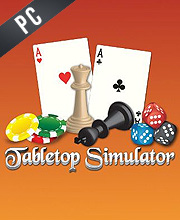 What is Tabletop Simulator CD key?

It's a digital key that allows you to download Tabletop Simulator directly to PC from the official Platforms.

How can I find the best prices for Tabletop Simulator CD keys?

Allkeyshop.com compares the cheapest prices of Tabletop Simulator on the digital downloads market to find the best sales and discount codes on trusted stores.

Make your own original games, import custom assets, automate games with scripting, set up complete RPG dungeons, manipulate the physics, create hinges and joints, and of course, flip the table when you are losing the game.

Buy this and you can send 3 copies to your other 3 friends so that you can play together.

In the depths of space, the alien races of the Cosmos compete with each other for control of the universe. Alliances form and shift from moment to moment and cataclysmic battles send starships screaming into the warp.

Using unique and clever mechanics, Zombicide is designed as a fully cooperative game where no player has to play as the zombies.

A cooperative board game in which you play as an apprentice wizard during a magical emergency.

It is a modern twist on the classic family roll-and-move party board game. In Mr. game, it is a chaotic and unpredictable rat race to the ever-changing finish.

Find all the best prices for Tabletop Simulator DLCs on Allkeyshop!

EU STEAM CD KEY: Requires an EUROPEAN IP address or you must activate it with a VPN (Virtual Private Network) in order to play Tabletop Simulator. Might have languages restrictions or language packs. Read the description on the store game page to know if the EU IP is only needed for activation or for playing also (maybe on EU Servers). Most of the stores offer you their help, or show you how to do this with a tutorial to follow.
EUROPEAN STEAM GIFT : It’s a steam gift for Europe which requires an European IP address to activate and to play Tabletop Simulator on Steam. Read carefully the store description about region and language restrictions.
STEAM GIFT : A Steam gift is a one-time transfer you receive. You activate and install Tabletop Simulator to play on Steam, it is a non-refundable game that stays in your Steam games collection. Please read the store description about any language or region restrictions.
STEAM GIFT ROW : This a steam gift for ROW regions. It means for Rest Of the World. This product can't be purchased and activated in Several countries. Please read the store description to know the full list of countries which are concerned.
STEAM CD KEY : Use the Steam Key Code on Steam Platform to download and play Tabletop Simulator. You must login to your Steam Account or create one for free. Download the (Steam Client HERE). Then once you login, click Add a Game (located in the bottom Left corner) -> Activate a Product on Steam. There type in your CD Key and the game will be activated and added to your Steam account game library.
Pack X4
Standard Edition
Compare Choose & Buy Download (723)