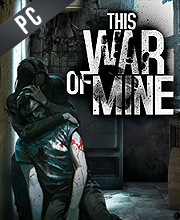 Buy This War of Mine CD Key Compare Prices

What is This War of Mine CD key?

It's a digital key that allows you to download This War of Mine directly to PC from the official Platforms.

How can I find the best prices for This War of Mine CD keys?

Allkeyshop.com compares the cheapest prices of This War of Mine on the digital downloads market to find the best sales and discount codes on trusted stores.

A survival themed adventure game, This War of Mine is a brilliant new concept. Developed by Bit Studios and inspired by the Bosnian War in the Siege of Sarajevo, it focuses on civilian experiences during war.

Instead of playing a soldier of war, you play as the surviving casualties of war. An intelligent twist on your typical war games. You will be in command of a group of civilians and your utmost goal is survival.

You have to go through a night and day cycle. Snipers abound at daytime and makes it impossible for you to go outside. So your choice would be to stay indoors, where you can feed and heal your survivors as well as make tools from materials you have gathered.

Night time is ideal for venturing out and scavenging for any resources that you can use. You will also meet other survivors  and will have the option of either helping them or killing them and looting what they have.

This War of Mine has an amazing soundtrack and an original new plot that will captivate you.

All This War of Mine DLC’s…
Loading offers...
Show more offers Show all offers

Zoom 1m 3m 1y All
Track product
EPIC GAMES KEY : Region Free / Worldwide. Requires Epic Games Launcher App in order to play the game. You need to create a free account here in order to download This War of Mine from Epic Plateform . Read the description on the store page about any language or country restrictions.
GOG.COM CD KEY : You need to register on Gog.com, then use the GOG Key to download and activate your game to play This War of Mine.
EU STEAM CD KEY: Requires an EUROPEAN IP address or you must activate it with a VPN (Virtual Private Network) in order to play This War of Mine. Might have languages restrictions or language packs. Read the description on the store game page to know if the EU IP is only needed for activation or for playing also (maybe on EU Servers). Most of the stores offer you their help, or show you how to do this with a tutorial to follow.
STEAM GIFT : A Steam gift is a one-time transfer you receive. You activate and install This War of Mine to play on Steam, it is a non-refundable game that stays in your Steam games collection. Please read the store description about any language or region restrictions.
STEAM CD KEY : Use the Steam Key Code on Steam Platform to download and play This War of Mine. You must login to your Steam Account or create one for free. Download the (Steam Client HERE). Then once you login, click Add a Game (located in the bottom Left corner) -> Activate a Product on Steam. There type in your CD Key and the game will be activated and added to your Steam account game library.
STEAM KEY ROW : It means for Rest Of the World countries which are not concerned by the region restrictions. This product can't be purchased and activated in Several countries. Please read the store description to know the full list of countries which are concerned. Use the key to Download and play This War of Mine on Steam.
Anniversary Edition
Bundle
Complete Edition
Standard Edition
Standard + DLC
Compare Choose & Buy Download (791)

Such a a golden price for this awesome game. 11 bit studious made a great work on this one. Highly recommended

A great game, simple but full of feelings and hard choices… Excellent, worth every penny!

One of the best survival war games. This is a game where all the decisions we do really matter. Recommend!

‘This War of Mine’ is a side-scrolling survival game developed and self-published by 11 bit studios back in 2014. The game’s overall theme is based on a war-torn city with player activity focused on civilian survival through scavenging, trading, crafting and resource management rather than direct military action.