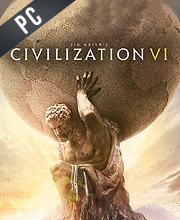 What is Civilization 6 CD key?

It's a digital key that allows you to download Civilization 6 directly to PC from the official Platforms.

How can I find the best prices for Civilization 6 CD keys?

Allkeyshop.com compares the cheapest prices of Civilization 6 on the digital downloads market to find the best sales and discount codes on trusted stores.

Become the ruler of the world with Civilization VI. This turn-based strategy game will allow you to conquer the whole world and create a civilization that will last until the end of time.

Civilization VI is my new favourite addiction that I honestly can’t really fault.

Civilization VI is, frankly, the best 4X strategy game in the world.

The Deluxe Edition comes with the base game, soundtrack and 4 post-launch DLC packs.

The Bonus Edition includes the base game and the Aztec Civilization Pack.

Edition’s can be different or can change over time, make sure to check each seller’s website.

Sid Meier’s Civilization 6 Rise and Fall introduces 8 new civilizations and 9 new leaders. This will also come with 8 new world wonders and new units, districts, buildings and improvements. Here, players will have to guide a civilization through the ages.

Find all the best prices for Civilization 6 DLCs on Allkeyshop!

I’ve always had the impression that Civilization is one of those games that everyone can enjoy, and then I recently found out that I’m practically the only one in the newsroom really excited to come out with a six because I’ve been playing Civ for a long time. It completely changed my view of the series and I started noticing all the little things that are completely obvious to me, but to someone who has no idea about the game they have no reason to be. So after spending a few hours with a six in Warsaw I wasn’t sure how much as the deepest Civ game so far is accessible to new players, but now I can say with certainty that it’s the best sequel for both new and old players.

Although due to the sheer volume of content, it would be to be expected that each new game in the series progresses significantly, this has not been the case so far, and the same is the case with the six. Come to think of it four thousand years ago the ancient Egyptians worshiped cats, and today we as modern cosmopolitans do more or less the same thing just over the internet and well come on most of us no longer have slaves. So we haven't made enough progress to deserve some big changes, and whenever Civilization tried to predict the future and our progress as with the Beyond Earth experiment, it didn't go well for them.

Civilization 6 therefore moves forward in small but sure steps and takes an analytical approach to the evolution of the series. It adds up all the elements of the previous games and then weighs their pros and cons in order to obviously remove the latter and put together one coherent whole. What I can’t stop emphasizing is the interconnectedness of the various systems and mechanics that were separated in previous games as separate gameplay basics. In my opinion, this is what makes the six the most detailed, but at the same time a good game for beginners who can learn all the necessary mechanics in a well-organized way - the most complex is the content, but the easiest to present.

A fun spinoff of the good classic civ games! Fun singleplayer, but frustrating multiplayer system. A lot of different civilizations to choose from each with unique bonuses and units. The game improves on alot from the older games, an example is the simplefied and sleek new interface. Sadly the multiplayer works quite badly, and often fails to connect. Overall a fun and strategic RTS with a lot of content, and fun multiplayer IF you manage to make it work. An ok 3.5/5.

It’s good but kinda hard to get into without trying.

Great game, i started play from civilization i and i most liked this

This game Is honestly beautiful, at first I was a bit worried about how the new cartoonish style would flow in the game.

this game is so good, even after several hundred hours in I’m still finding new ways to build up my civs, the DLC’s add so much to it as well.