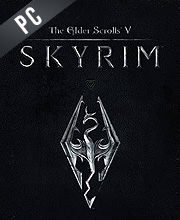 What is Skyrim CD key?

It's a digital key that allows you to download Skyrim directly to PC from the official Platforms.

How can I find the best prices for Skyrim CD keys?

Allkeyshop.com compares the cheapest prices of Skyrim on the digital downloads market to find the best sales and discount codes on trusted stores.

Skyrim’s main story revolves around the player character (called Dovahkiin) and his/her efforts to defeat Alduin the World-Eater, a dragon who is prophesied to destroy the world. The game is set approximately two hundred years after the events of Oblivion and takes place in the fictional province of Skyrim. Over the course of the game, the player completes quests and develops the character by improving skills.

Unlike previous Elder Scrolls games, Skyrim does not require the player to select a character class at the beginning of the game, negating a problem which the development team felt that previous entries had by forcing the player into a rigid play-style too early into the game.

Skyrim continues the open world tradition of its predecessors by allowing the player to travel anywhere in the game world at any time, and to ignore or postpone the main storyline indefinitely.

Definitely worth experiencing the adventure that Skyrim has to offer.

Zoom 1m 3m 1y All
Track product
EU STEAM CD KEY: Requires an EUROPEAN IP address or you must activate it with a VPN (Virtual Private Network) in order to play Skyrim. Might have languages restrictions or language packs. Read the description on the store game page to know if the EU IP is only needed for activation or for playing also (maybe on EU Servers). Most of the stores offer you their help, or show you how to do this with a tutorial to follow.
STEAM GIFT : A Steam gift is a one-time transfer you receive. You activate and install Skyrim to play on Steam, it is a non-refundable game that stays in your Steam games collection. Please read the store description about any language or region restrictions.
STEAM CD KEY : Use the Steam Key Code on Steam Platform to download and play Skyrim. You must login to your Steam Account or create one for free. Download the (Steam Client HERE). Then once you login, click Add a Game (located in the bottom Left corner) -> Activate a Product on Steam. There type in your CD Key and the game will be activated and added to your Steam account game library.
STEAM KEY ROW : It means for Rest Of the World countries which are not concerned by the region restrictions. This product can't be purchased and activated in Several countries. Please read the store description to know the full list of countries which are concerned. Use the key to Download and play Skyrim on Steam.
Anniversary Edition
Bundle
Bundle 1
DLC Pack
Legendary Edition
Pack X3
Special Edition
Standard Edition
Compare Choose & Buy Download (772)

Great game, fantastic story, I played more than 20 hours on it and it was like 1 hour. The map is so big, I will need a lot of additional time to explore it

This is my first TES game and i love it, 200 hours for sure good game, good graphics and funny gameplay, loot gameplay story possibility !

This game is the epitome of fantasy RPGs. Over 500 hours of gameplay so you’ll never be bored. Tons of easter eggs to discover, and plenty of mods that can give this already great game something even better.

after looking prices looks like buying legendary edition is better. game is really good. in game you can do whatever you want. you won’t disappointed.