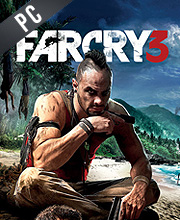 It's a digital key that allows you to download Far Cry 3 directly to PC from the official Platforms.

How can I find the best prices for Far Cry 3 CD keys?

Allkeyshop.com compares the cheapest prices of Far Cry 3 on the digital downloads market to find the best sales and discount codes on trusted stores.

Far Cry 3 is the third installment in the Far Cry series developed by Ubisoft Montreal and published by Ubisoft. Its story takes place some time after the events of Far Cry 2. Despite this, it is not a direct sequel to the original Far Cry game.

Featuring stunning visuals and gameplay Far Cry 3’s new combat system allows you to play the game your own way, whether it be like rambo or hitman, or a combination of both, it is all up to you! The story might be great, but you can pretty much overlook everything when there is so much to do and explore.

Far Cry 3  contains a very sturdy game engine that almost makes it the perfect game. It flows so smoothly and flawlessly that there is nothing to complain about.

The story takes place on a pirate-infested island where Jason Brody and his friends have been taken prisoner by a pirate lord named Vaas.

Vaas plans to extort ransom money from their parents, then sell them into slavery. With the help of his older brother Grant, Jason breaks out of captivity, however his older brother Grant is killed by Vaas in the escape. Jason is their only way out and his decision will lead to a series of action-packed events.

Ubisoft’s balance of open world gameplay and FPS action really hits the spot, and overall the game does a fantastic job in providing players with an interesting, immersive gaming experience. Definitely worth every cent you pay for it.

This game it’s a must for all who enjoy the far cry series. To me far cry 3 was and is the best.

One of my favourite game from Far Cry series, still enjoyable in 2020 even after 10 years from its release!

The game got with Ubisfot Forward sale very good price l on Uplay store and on Steam too. Its good open world game.

Far Cry 3 is a definite step up from the previous two titles that we liked, but in both we found certain grudges that distorted the overall impression. Far from being a drawback, there is no doubt that this is an intelligently designed, premium production quality title that will appeal to most players