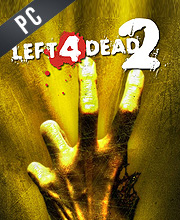 It's a digital key that allows you to download Left 4 Dead 2 directly to PC from the official Platforms.

How can I find the best prices for Left 4 Dead 2 CD keys?

Allkeyshop.com compares the cheapest prices of Left 4 Dead 2 on the digital downloads market to find the best sales and discount codes on trusted stores.

Left 4 Dead 2 is the sequel to Turtle Rock Studio’s Left 4 Dead. It is a cooperative first-person shooter game that focuses on four (4) survivors, who fought against hordes of the Infected and developed psychosis and now exhibits zombie-like features.

The main goal of the game is to have the Survivors fight their way through five (5) game campaigns distributed with safe houses that acts as checkpoints.

Get to enjoy Left 4 Dead 2’s four (4) game modes. Campaign: This is where it can also act as a multiplayer mode and up to four (4) human players fighting against a horde of the Infected. You must pass each campaign. Single player mode, allows one (1) person to play without intrusion from other players. Scavenge: The new 4-on-4 mode that lets the four (4) survivors play to finish a certain task while the other players acts as the Infected and attempts to stop the survivors. Survival: A time trial where the survivors must compete in order to move to the next level. Versus: Up to four (4) players that takes control of different Infected and prevent the Survivors from achieving their goal.

Left 4 Dead 2 is a continuation of the first zombie game. In the game, we play in one of the four characters, of which the choice is irrelevant, because the characters do not have special perks. The plot is divided into several acts, which are related to each other, but if someone wants to play it, you can play the campaigns not one by one, and still will have fun, because in Left 4 Dead 2 the plot is only a background, for the slaughter we will do at each stage of the game.

It’s not fun to play this game solo since AI is sometimes messed up, but if you have few friends for coop, you’re gonna have a great time.

Left 4 Dead 2 is full of fan and action. If you like games with friends this is your medicine 🙂

I remember well, when I bought the game right after its release in the store because I couldn’t wait longer to play the second part of Left4Dead. *_*

Engaging solo or cooperative experience assuming you find enough of your actual friends to play wtih. (Bad with randos)
Lots of levels, and community content as well. Still some being made.
Lots of weapons that feel great to use; a lot of different ways to approach the semi-randomized encounters.
Still one of the greatest zombie games in a market that often seems saturated, even all these years later.

Cons:
The community and the randoms are the most cancerous of the internet. Forget league, forget ranked overwatch, forget the most toxic trash communities you’ve ever experienced. The online L4D2 community is 75%♥♥♥♥♥♥jokes, and 25% children screaming, and there is some overlap there. We GET IT, the jockey humps people.

Among the players there are two groups, the people so brain dead they can’t beat the bots, and then there is the “I’ve played since beta and idc if its 2017” crowd that will kick you if your steam account doesn’t have 2000 hours logged yet.

I feel like judging the community is a fair point for judging this game because so much of the experience relies on that cooperative/competitive element, and its pretty damn bad these days.

Would I still recommend the game..? Only if you have friends to play with. Which in 2017 if you all feel like grabbing L4D2… that’s surprising but at least it will be cheap.