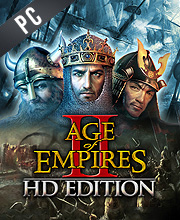 What is Age of Empires 2 HD Edition CD key?

It's a digital key that allows you to download Age of Empires 2 HD Edition directly to PC from the official Platforms.

How can I find the best prices for Age of Empires 2 HD Edition CD keys?

Allkeyshop.com compares the cheapest prices of Age of Empires 2 HD Edition on the digital downloads market to find the best sales and discount codes on trusted stores.

Experience one of the most iconic titles in its genre, remastered for modern players.

All in all, the combat and gameplay is unchanged, and I’m OK with that. Even in a world of beautiful advanced RTS titles like Starcraft II the game holds up remarkably well.

The game is highly enjoyable for both friendly comp stomps and player-vs.-player games. Of course, some people rage quit after accusing you of cheating simply because of your Byzantine fire ships’ predilection for sinking undefended fishing fleets.

Impressive effort with a few noticeable problems holding it back. Won’t astound everyone, but is worth your time and cash.

The Forgotten adds five additional civilizations you can use against the AI or in multiplayer, seven new single-player campaigns, and more.

Rise of the Rajas

Rise of the Rajas expands on the classic RTS title with new civilizations, new campaigns,new units and more.

Great memories of the past… An amazing RTS game!