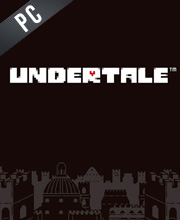 What is Undertale CD key?

It's a digital key that allows you to download Undertale directly to PC from the official Platforms.

How can I find the best prices for Undertale CD keys?

Allkeyshop.com compares the cheapest prices of Undertale on the digital downloads market to find the best sales and discount codes on trusted stores.

Undertale, is a game created by Toby Fox.

The game serves as a role-playing video game where the player takes control of a child that has fallen into the Underground, a large secluded area that is underneath the Earth which is separated by a magical barrier. The quest is to return to the surface of the Earth and along the journey, the player meets various monsters through combat.

Undertale lets the player explore different areas of the Underground such as caves, regions, towns which requires solving of puzzles and many more. On the course of the journey, the player will meet monsters who challenges them in combat the players can decide whether they kill the monster, flee or befriend them.

When the players encounters these monsters, they enter the battle mode. The player will have a small red heart which represents his existence and must avoid attacks unleashed by the enemy monsters.

Great soundtrack for a great game. I recommendt it!

Another indie game thats not for my type. when i watched the trailer, i remembered my Amiga 🙂

Great soundtrack, atmosphere and story. You will fall in love with many characters 🙂 But choose your desicions carefully 😛

I love Undertale! It has a very cool gameplay, and a good soundtrack :3

i like this type of games. and at very good price .
thanks allkey