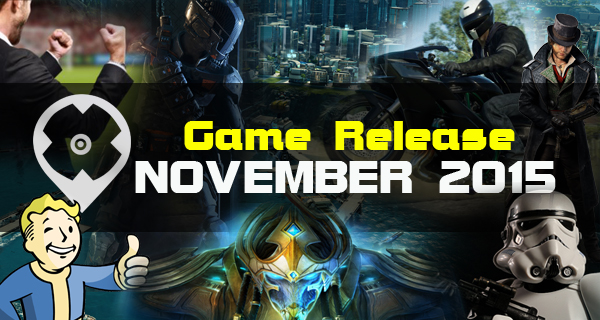 It’s almost the end of October and we’re just a couple of days till Halloween! This time though it’s just not the kids who are getting their fair share of trick and treat, it’s the gamers of all ages as well. We are getting huge gaming treats from our favorite game developers, without the added tricks.

Check out the awesome lineup of games coming out this November!

Anno 2205 is a high-tech exploration and city builder that takes you in the deepest regions of space! You will take humankind into the future and venture into space, settle on the moon, and go join a race for resource and power. The game is focused on conquering earth itself, building huge cities, grand industrial complexes and secure humankind’s future by travelling into space. A new infusion energy has been found that will revolutionize the very existence of humans, and it’s necessary that we get our hands on them. Are you ready to lead humankind’s quest for survival?

Within three years of development, Treyarch returns with an all-new title after the two most-played games in Call of Duty history. Innovated with next-generation hardware, the most admired studio introduces a whole new era of Black Ops – Call of Duty: Black Ops 3. It is a dim and gritty future where bio-technoloy has created a brand new breed of Black Ops soldier in a world where the cutting-edge military machinery determine the future of warfare and the boundaries between our own humanity and  technology are unclear.

From the creator of huge games like Fallout 3 and The Elder Scrolls V: Skyrim comes another milestone in open-world games. Fallout 4 will be Bethesda’s most ambitious game ever and will pave the way for the next generation of open-world gaming. Fallout 4’s next-generation graphics and lighting engine brings to life the world of Fallout like never before. This, combined with its extremely fun RPG style gameplay, made Fallout 4 one of the most anticipated games this November.

StarCraft 2: Legacy of the Void

StarCraft 2: Legacy of the Void is the third and final part of the StarCraft II trilogy of games (after Wings of Liberty and Heart of the Swarm). StarCraft 2: Legacy of the Void shows its featured race – the Protoss – telling a story of their struggle with all kinds of existential choices and ambitions. It will showcase an all-new Protoss-focused campaign, new multiplayer units, changes to existing units, new multiplayer maps, two new game modes (Archon Mode and Allied Commanders) and a more pumped up online experience.

Release Date: 17 November 2015 (Available for: Uplay, Xbox One; Requires the base game The Crew to activate)

The Crew: Wild Run is a new expansion coming to Ubisoft’s racing title. It presents an open world recreation of the entire United States on a smaller scale. You will be taking on gangs and the police alike while racing through canyons and cities. The Crew: Wild Run  will add more monster trucks, motorcycles, dragsters and drift cars along with on and off-road options.

The developers of Assassin’s Creed have done it again. They’ve created another gorgeous masterpiece – Assassin’s Creed: Syndicate. The game is the ninth main installment in the Assassin’s Creed series which features London way back 1868.  You will take on the role of Jacob Frye, who, with the help of his twin sister, will attempt to change the corrupt system. Stand up for what’s right and lead the underworld to change this corrupt and disgusting system in London in an epic adventure filled with action, intrigue, and violent combat.

Star Wars Battlefront is back and it’s bigger than it has ever been before! This reboot of Star Wars Battlefront is a huge throwback to the Star Wars saga. You will be fighting epic battles on iconic planets and rise in the rankings by playing heroic Rebellion or the evil galactic empire. It features large-scale 40-player battles to smaller modes for 8 players, Star Wars Battlefront has a variety of action-packed multiplayer modes and a great online play system that pits you against the best players in the world.

This month is great for gamers :)… I wait for Star Wars Battlefront and Fallout 4