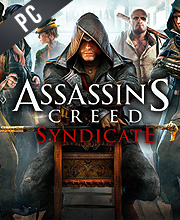 You can participate to these tests by adding comments about your digital download purchase in the store review page. Enjoy the best deals for Assassin's Creed Syndicate CD Key with Allkeyshop.com!

The year is 1868, during the Industrial Revolution of the Victorian Era in London. Technologies once thought of to be impossible are slowly coming to a reality making life much better. With all the changes, an established Order named Templar has taken over. Corrupt and unjust, they have taken rule over the land. Twin Assassins Jacob and Evie Frye are set out to put justice in order. Taking over London’s underworld crime syndicate they form an army against Templar.

This game features a 3rd person, open-world exploration, with new systems of travel as well as smooth, fast paced combat and stealth mechanics. You can also switch between the two characters Jacob and Evie. Jacob being more apt for close combat and Evie, using stealth and wit. You main weapons would be brass knuckles, a revolver, a sword hidden in a cane and the traditional Nepalese curved kukri knife.

Prepare yourselves to explore 18th Century London and take back control from Templar’s grasp.

Uncut: Uncensored version of the game; may not be allowed to be activated/played in some countries. Please refer to the seller’s website for complete information on restrictions

Be the first one to write a review about Assassin's Creed Syndicate !

This is the worst Assasin’s creed ever performance wise, the story and all is okay, but the game itself is really bad, so many bugs, from npc’s getting stuck or just the player itself not coming down of a 1m high fence. So don’t buy it if you expect a good quality game, but for the story line it is okay.

Why you haven’t update Steam price with the actual deal?

Hi Marco, we will check. Thank you for your comment!

Seems like a really good game…the story the graphics everything basically….can`t wait to play it :)…