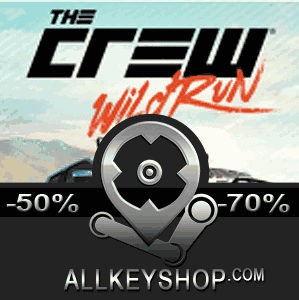 What is The Crew Wild Run CD key?

It's a digital key that allows you to download The Crew Wild Run directly to PC from the official Platforms.

How can I find the best prices for The Crew Wild Run CD keys?

Allkeyshop.com compares the cheapest prices of The Crew Wild Run on the digital downloads market to find the best sales and discount codes on trusted stores.

The Crew Wild Run, extension of the game The Crew is an arcade racing video game developed by Ubisoft Reflections and Ivory Tower and published by Ubisoft.

This is a motor racing game where the arcade side places a premium on pure simulation. We find it very in this title the ability to drive a multitude of legendary cars but also, and this is new, motorcycles.

The game features three new game modes: the Dragster mode where you try to beat speed records on track, the Drift mode where you make a series of skidding on slippery roads and the Monster Truck mode in which you pilot your oversized gear on courses filled with ramps, jumps, very steep slopes and many other obstacles.

It is possible to customize your vehicle completely change its appearance and enhance its performance. Moreover, there are special kits for the new game modes Dragster, Drift and Monster Truck. The Crew Wild Run is a massive multiplayer game in which you battle other players in races that earn you experience points, money and rare coins to upgrade your vehicle.

You can also access a PVP mode, Summit participant, an American traveling championship, in which you find many and varied races; Moreover, original and limited in time trials will be regularly proposed to provide variety and excitement.

You can also play in free mode where you create your own races by determining the layout of the course with mandatory way points that you place where you want. Through these races, you earn experience points to unlock new vehicles to drive.

Finally, the game boasts significant technical improvements such as optimized graphics engine, a more complex physics to improve the driving experience or a dynamic weather system that forces you to adapt your driving to changes in climate conditions during tests . Passionate mechanics and fan of racing circuits start your engine, take the lead of the competition and become the best driver!

A good NFS meets Test Drive Unlimited, thats how i would describe the game to a friend. This is the first DLC as the main game went free on uplay, but i strongly suggest buying this if you like playing arcade racing games!

Very cheap price, got my code instantly! Would recommend this game to anybody as its like dirt rally but better!

The Crew Wild Run Expansion is great and the game too ! I just love this game and is really great ! The best website from where to buy is Kinguin !

The Crew Wild run is simply an amazing racegame.
looking forward to get it.
ready, steady go!