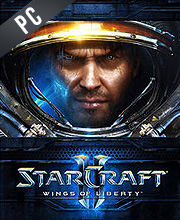 What is StarCraft 2 Wings of Liberty CD key?

It's a digital key that allows you to download StarCraft 2 Wings of Liberty directly to PC from the official Platforms.

How can I find the best prices for StarCraft 2 Wings of Liberty CD keys?

Allkeyshop.com compares the cheapest prices of StarCraft 2 Wings of Liberty on the digital downloads market to find the best sales and discount codes on trusted stores.

The game continues the epic saga of the Protoss, Terran, and Zerg. These three distinct and powerful races clash once again in the fast-paced real-time strategy sequel to the legendary original, StarCraft.

One of the most famous games in the world has finally added a sequel that has been long overdue, but the immense waiting has really paid off. Blizzard has another jewel to add to their crown, and it’s easy to see why. By not veering too far away from the original formula, Blizzard has introduced Wings of Liberty.

Hordes of veteran, upgraded, and brand-new unit types do battle across the galaxy, as each faction struggles for survival. Featuring a unique single-player campaign that picks up where StarCraft II: Heart of the Swarm left off, StarCraft II: Wings of liberty presents a cast of new heroes and familiar faces in an edgy sci-fi story filled with adventure and intrigue.

In addition, Blizzard again offers unparalleled online play through Battle.net, the company’s world-renowned gaming service, with several enhancements and new features to make StarCraft II the ultimate competitive real-time strategy game. This game is hands down the greatest game ever made. Everything about the original was improved to a great degree, from match making to game balance. Certainly a must buy!

(Product has been restricted to Europe. Please refer to the seller’s website)

StarCraft 2 Wings of Liberty, is a awesome game, with a great Story.

When RTS game still were the most loved games… Great memories.

starcraft 2 is the best strategy game ever existed !

starcraft 2 is the better strategy game ever !

The best store for buying Starcraft 2 CD key is G2A