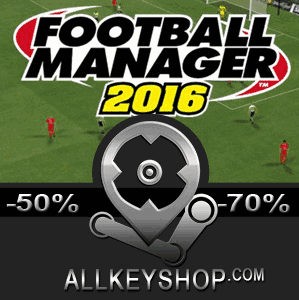 What is Football Manager 2016 CD key?

It's a digital key that allows you to download Football Manager 2016 directly to PC from the official Platforms.

How can I find the best prices for Football Manager 2016 CD keys?

Allkeyshop.com compares the cheapest prices of Football Manager 2016 on the digital downloads market to find the best sales and discount codes on trusted stores.

Football Manager 2016 is a sports simulation game developed by Sega and published by Sports Interactive.

This game has created a surprise with the arrival of two new modes that will keep the interest of the simulation with the fans. Addicts of virtual management this year will create their club from scratch. Called simply “Create a Club“, this new option will allow you not only to choose the name of your team, but also the jersey colors and of course their players. It’s up to you at that time to choose which league your players evolve in and also allow your friends to join your club.

You will also have the pleasure of discovering “Fantasy Draft” where you will be able to manage your virtual training coaches (maximum 25 pros) with a box and confront their friends in a mini-league budget. To get a bit more into the details, you can choose from a list, the players who will have the honor to wear your colors … or not. The improvements also include the physical aspect of the virtual manager. Now you are free to customize the look of your avatar, its physical, his profile picture, but also its conduct on the edge of the button.

The entertainment side, some effort is noteworthy. Thus, more than 2000 new animations have appeared, particularly for set pieces. Regarding the analysis of matches and assuming that correct errors, particularly in terms of strategy and coaching will allow you to climb the ranks and divisions, Sega has worked particularly hard on post-match studies.

They will therefore be more comprehensive and clear thanks to a partnership with the Institute Prozone, it becomes a turning point to advance in the hierarchy.

STEAM CD KEY : Use the Steam Key Code on Steam Platform to download and play Football Manager 2016. You must login to your Steam Account or create one for free. Download the (Steam Client HERE). Then once you login, click Add a Game (located in the bottom Left corner) -> Activate a Product on Steam. There type in your CD Key and the game will be activated and added to your Steam account game library.
EU STEAM CD KEY: Requires an EUROPEAN IP address or you must activate it with a VPN (Virtual Private Network) in order to play Football Manager 2016. Might have languages restrictions or language packs. Read the description on the store game page to know if the EU IP is only needed for activation or for playing also (maybe on EU Servers). Most of the stores offer you their help, or show you how to do this with a tutorial to follow.
Limited Edition. Read the store description to know the content.
Standard Edition. Read the store description to know the content.

I hope fm 2016 will drop its price soon because I dont have it!

My brother is a maniac for this game I guess if you like soccer you will pretty much be glued to this one, and once again AllKeyshop provides the price comparison on each online store, as of now I recomend G2A it’s not the cheapest but I vouch for it, never gave me trouble.

Like always, FM will never be a bad game, it has it’s own fanbase! This one can be bought for a good price at cd-keys.com

This is the best stragedy football game now. Recommend.