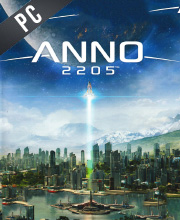 It's a digital key that allows you to download Anno 2205 directly to PC from the official Platforms.

Allkeyshop.com compares the cheapest prices of Anno 2205 on the digital downloads market to find the best sales and discount codes on trusted stores.

Anno 2205 is a management and real-time strategy video game developed and published by Ubisoft.

This is the sixth title of the famous Anno series that allows you to conquer space and colonize the moon and power your cities on raw materials from Earth. Indeed, the game is to control large territories by building prosperous cities in the distant future there in 2205. There are three play areas: the temperate zone and the Arctic on Earth but also the lunar craters.

Each of these areas has a specific architecture and characteristics that you need to consider in your playing. The extreme cold is the major constraint to manage the Arctic region or the need to put in place shields over your lunar colonies to protect from meteorites.

To build cities, you must build the necessary infrastructure for residents to meet their needs: water, electricity, food, houses, roads, factories and industrial areas … Every building is a customizable building, leaving great freedom to the player to create their cities. Thus, it is possible to develop gigantic and unique cities on much larger areas than in the previous series title.

Created at the request of the fan community, there are also crisis areas that are military missions for scarce resources for your war fleet to engage in battle. The military aspect of the game, however, is optional and, unlike previous titles in the series, so you do not have to fight and defend your cities against possible invaders.

The main novelty of the game lies in the principle of multi-sessions as you can manage multiple cities simultaneously. Easily accessible, the interface allows you to move from one colony to another almost instantaneously. It is of course possible to share resources between your cities and when you’re dealing with one of them, the others continue to grow without you.

Finally, the game offers sublime and realistic graphics with an unprecedented level of detail. You have the soul of a builder and spirit of a pioneer. You have at your hands the ability to create powerful terrestrial megacities and colonize the moon to dominate humanity.

Amazing game with great graphics and a sick storyline , recommended .

Played the last one so much, looking forward to have this one!