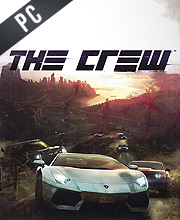 What is The Crew CD key?

It's a digital key that allows you to download The Crew directly to PC from the official Platforms.

How can I find the best prices for The Crew CD keys?

Allkeyshop.com compares the cheapest prices of The Crew on the digital downloads market to find the best sales and discount codes on trusted stores.

The Crew is an arcade racing game developed by Ivory Tower Car & Ubisoft Reflections and published by Ubisoft.

The game takes place in a huge open world, reproducing the entire United States to a scale of about 1/40! The gameplay is based on a type of MMORPG with leveling system, the player gains experience through various actions that allows them to get new parts and equipment to customize their cars and make them more powerful. There 22 different vehicle brands for a total of 47 cars.

The game is playable both online and offline, allowing players to play with their “crew”, which can help you in your progression, or to PvP against other players, or other crews.

The car is distinguished by 6 tuning kits that works as a specialization of the vehicle stock, street, perf, raid, and dirt circuit. Every car aesthetic is customizable for example 181 different paints and 254 stickers.

The game also stands out due to its great script, which will take you across the USA. The player Alex Taylor, a car driver, his brother is the leader of a gang consisting of 5-10 amateur drivers for illegal races.

He is murdered before the eyes of Alex, a member of the gang, the police accuses Alex of the crime and imprison him. 5 Years later, an FBI agent contacted him and offered him a deal: Alex out of prison but in exchange he will agree to work for the FBI, aiming to capture the people responsible for the murder of his brother.

The Crew is really an innovation that combines the automotive game with MMORPG, not to be missed!

This is a relaxing and fun game. Still this days I play it!

You have great storyline and graphics are excellent.