15 of the Best RTS Games and Compare Prices

“You want to play a Real-Time Strategy Games, but don’t know which one to choose?

Luckily Allkeyshop is here to help you with this top 15 of the best Real-Time Strategy Games!”


Play one of the most popular strategy games ever, now fully remastered with all of the original campaigns and expansions. Choose between three AIs, the original, updated HD Edition, or the newer AI developed for the Definitive Edition. The game features more than 200 hours of gameplay and 1,000 years of human history.

As a Northman trade, invade and devote your life to the gods as you build your settlement on the new continent of Northgard. Assign your Vikings to jobs such as farmer, sailor, or warrior, and manage your resources to get through the harshest winter that you have known. Play against the AI or friends, and head online to climb the ranks and become a Norse God.

Enter an alternate 1920s and command mechs across Europe as you fight for control in a world ravaged by the Great War. Complete dozens of missions over three epic campaigns, guiding new heroes through a war that will change history. The game features more than 40 units, multiple heroes, unique abilities, and offline and online skirmishes and challenges.


The Warhammer world comes to life in a breath-taking campaign of exploration, expansion, and conquest. Level up your Lords and Heroes, and arm them with mythical weapons and armor. Play as one of eight Legendary Lords and any of the four races, each offering a unique playstyle, campaign mechanics, armies, monsters, and army abilities.


Lead civilizations from Europe, Asia, and the Americas and take command of your destiny using mercenaries, pirates, infantry, and skirmishers. Dominate the battlefield with a range of weapons, including muskets, grenades, crossbows, and warships. This edition of the game features all previously released expansions and two new game modes.

The Remastered Collection releases with all three expansion packs, a new multiplayer experience, and the ability to switch quickly from classic and remastered graphics. It features a modern UI, map editor, quality of life improvements, mod support, and more than 7 hours of bonus FMV footage.

Build and defend your colony from billions of infected in a post-apocalyptic world where you survive as one of the last humans. Play a stunning campaign featuring 48 missions, 90 available technologies, and uncover how the pandemic began. Build your army, keep them happy with food and money, and build a fortress to house them with walls, gates, and towers.


Fight on the Eastern Front in a historically accurate World War 2 RTS. The game features 1:1 scale battlefields, with thousands of men, and supply management in an epic single-player dynamic campaign. Utilize more than 600 units, including ground and air units, and take advantage of terrain in offline and online battles.


Conquer the British Isles and wage war with ten playable factions. Face defining moments in history and make choices that will impact the world forever. Immerse yourself in politics, technologies, recruitment, and economics.

Survive through the ages and expand and evolve as you battle the environment and roaming animals. Craft clothing, build tools and plan for winter’s harsh realities by stocking up on food. Build homes, research technologies, mine for stone, and hunt for resources.


Create your hero and immerse yourself in the rich world of Nortander. Build your army of elves, orcs, or humans and fight in epic battles in a fully-voiced campaign lasting more than 30 hours. Jump into multiplayer, where you can compete against others in PvP and Domination mode or play cooperatively as one or separate factions.


Discover all 12 factions from the tabletop game, including Imperial Navy, Space Marines, and Orks. Play the epic story through three dynamic single-player campaigns within the Gathering Storm setting, or head online for intense PvP battles.


Build and take command of battleships, spaceships, planes, and submarines. Play the entire campaign solo or co-op, and wage strategic warfare against multiple factions across hundreds of islands. Begin with nothing but a raft, build up an intergalactic fleet, and design freely with creative mode.

From the Depths System Requirements


Wage bloody war through five single-player campaigns with battlefields supporting up to 32,000 soldiers at one time. Take control of 20 playable nations, and expand across a map with hundreds of historic buildings. Fight on land and sea, and be victorious on an infinite number of randomly generated maps.

What is an RTS Game?

An RTS is a strategy game in which all action takes place simultaneously in real-time. 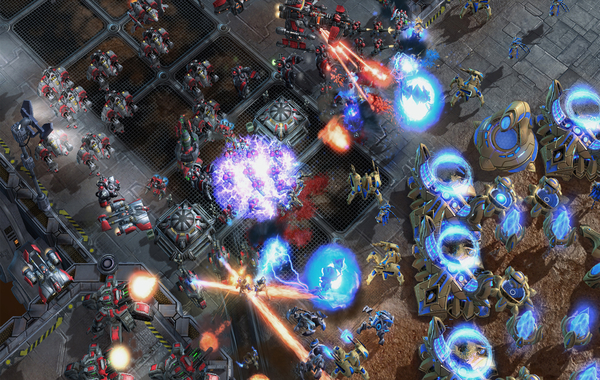 RTS games feature high-pressure, competitive scenarios in which players must be able to micro and macro-manage.

Why Are We Doing a Top 15 RTS Games List?

RTS Games are available at incredible prices, but with so many to choose from, we want to help you pick the game that’s right for you.