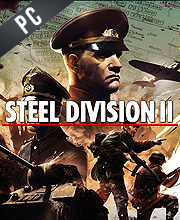 What is Steel Division 2 CD key?

It's a digital key that allows you to download Steel Division 2 directly to PC from the official Platforms.

How can I find the best prices for Steel Division 2 CD keys?

Allkeyshop.com compares the cheapest prices of Steel Division 2 on the digital downloads market to find the best sales and discount codes on trusted stores.

Shepherd a historically-accurate WW2 army in real-time tactical combat with thousands of soldier steadfast and attentive to your every command.

Experience the new 1:1 scale Dynamic Strategic Campaigns as you team up with your fellow tactical mates in co-op and multiplayer modes or lead as a single player locally or online.

The Dynamic Strategic Campaigns are much more than just other game modes, they are basically entirely new games within the game as they encompass such high detail and structure.

There are even realistic battles spanning across up to 25 different maps that hosts 600 historically accurate units across 18 new divisions. Also, the game introduces a refreshingly new deck system that gives you the tactical-freedom to customize your battlegrounds to your convenience. Mirror real life tactics of war or innovate your own, becoming unpredictable and effective.

May every triumph be a testament to your wit and tactical prowess.

Steel Division 2 will be attainable for PC through the game’s website or through the Steam Store in 2019.

GOG.COM CD KEY : You need to register on Gog.com, then use the GOG Key to download and activate your game to play Steel Division 2.
PUBLISHER WEBSITE CD KEY: Use the CD Key Code to download directly on the Official Website or from the store to play Steel Division 2. Follow the instructions given by the store. Verify languages available and possible region restrictions before buying.
EUROPEAN STEAM GIFT : It’s a steam gift for Europe which requires an European IP address to activate and to play Steel Division 2 on Steam. Read carefully the store description about region and language restrictions.
STEAM GIFT : A Steam gift is a one-time transfer you receive. You activate and install Steel Division 2 to play on Steam, it is a non-refundable game that stays in your Steam games collection. Please read the store description about any language or region restrictions.
STEAM CD KEY : Use the Steam Key Code on Steam Platform to download and play Steel Division 2. You must login to your Steam Account or create one for free. Download the (Steam Client HERE). Then once you login, click Add a Game (located in the bottom Left corner) -> Activate a Product on Steam. There type in your CD Key and the game will be activated and added to your Steam account game library.
STEAM KEY ROW : It means for Rest Of the World countries which are not concerned by the region restrictions. This product can't be purchased and activated in Several countries. Please read the store description to know the full list of countries which are concerned. Use the key to Download and play Steel Division 2 on Steam.
Bonus Edition
Commander Edition
Franchise Pack
General Deluxe Edition
General Edition
Standard Edition
Total Conflict Edition

Despite a good idea for the campaign and historical accuracy in prepared military operations, Steel Division 2 can be daunting for new players due to the amount of information and lack of tutorials. Yet when the basics are grasped, multiplayer conflicts quickly save the situation.

Very good looking game. Thank you allkeyshop.com for all giveaways.

The Steel Division 2 beta looks pretty cool and will have a lot of updates until release!

Strong focus on authenticity and set in 1944 WWII, based on real events. Might just give it a try. Looks interesting