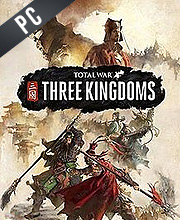 It's a digital key that allows you to download Total War THREE KINGDOMS directly to PC from the official Platforms.

How can I find the best prices for Total War THREE KINGDOMS CD keys?

Allkeyshop.com compares the cheapest prices of Total War THREE KINGDOMS on the digital downloads market to find the best sales and discount codes on trusted stores.

Welcome to ancient China in the year 190 CE, the new era of legendary conquest. Unite the fractured land with just one Emperor and a new way of life. Get the next biggest dynasty that will last throughout the ages.

Total War: Three Kingdoms is bureaucratic, obscure, dense and wickedly Machievellian if you have the appetite for it – but so was China in 190 CE, and I have genuine, sincere admiration for the way in which it’s been captured.

There is no doubt Total War: Three Kingdoms excels in many areas and has made some welcome if not long overdue changes, but it is far from perfect.

The Bonus Edition comes with the base game Total War Three Kingdoms plue the Yellow Turban DLC, Reign of Blood DLC and the Eight Princes DLC.

The Royal Edition comes with the base game Total War: Three Kingdoms and the Eight Princes DLC.

Be the first one to write a review about Total War THREE KINGDOMS !

One of the best games on his category.. looking for a strategy based game.. ? then this is the best choice !

A realy good game of the TOTAL WAR games, more strategic, it would be better if it had more units

I wish i could get better PC for playing this game :>

The Guanxi relationship/diplomacy mechanics could really add some depth if they’re done right!