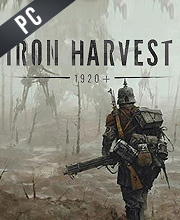 Find all Game Code stores and prices to download and play Iron Harvest at the best price. Save time and money: Compare CD Key Stores. Activate Iron Harvest CD Key on your Steam client to download the game and play in multiplayer.

You can participate to these tests by adding comments about your digital download purchase in the store review page. Enjoy the best deals for Iron Harvest CD Key with Allkeyshop.com!

Iron Harvest is a strategy, fantasy video game that is developed and published by King Art Games.

Set in the year 1920+ and in an alternate version of the world. Mankind was able to build huge and powerful machines that were once used in the Great War but are now used for everyday life.

Different factions had been made, some fight for influence while there are those who plan to destabilize Europe and be at war once again.

Saxony Empire – At this time, this is the most influential empire in Europe. They have great industry, modern factories, and strong military. They surrendered in the Great War but the conditions are unfavorable. Right now the mood in the Empire is bad and the aristocrats and elites feel humiliated.

Polaria Republic – They are largely an agricultural country that is sandwiched in between aggressive neighbors which are the Saxony Empire in the west and Rusviet in the east. Although they are planning to modernize their army, a large part of their land is being occupied by the Rusviets.

Rusviet – A powerful force that has great population as well as industrial potential. But the war had been long and they are tired and worn out. And to top all that, a revolution seems to be brewing.

STEAM CD KEY : Use the Steam Key Code on Steam Platform to download and play Iron Harvest. You must login to your Steam Account or create one for free. Download the (Steam Client HERE). Then once you login, click Add a Game (located in the bottom Left corner) -> Activate a Product on Steam. There type in your CD Key and the game will be activated and added to your Steam account game library.
EU STEAM CD KEY: Requires an EUROPEAN IP address or you must activate it with a VPN (Virtual Private Network) in order to play Iron Harvest. Might have languages restrictions or language packs. Read the description on the store game page to know if the EU IP is only needed for activation or for playing also (maybe on EU Servers). Most of the stores offer you their help, or show you how to do this with a tutorial to follow.
STEAM GIFT : A Steam gift is a one-time transfer you receive. You activate and install Iron Harvest to play on Steam, it is a non-refundable game that stays in your Steam games collection. Please read the store description about any language or region restrictions.
EPIC GAMES KEY : Region Free / Worldwide. Requires Epic Games Launcher App in order to play the game. You need to create a free account here in order to download Iron Harvest from Epic Plateform . Read the description on the store page about any language or country restrictions.
GOG.COM CD KEY : You need to register on Gog.com, then use the GOG Key to download and activate your game to play Iron Harvest.
Standard Edition. Read the store description to know the content.
Deluxe Edition. Read the store description to know the content.

Be the first one to write a review about Iron Harvest !