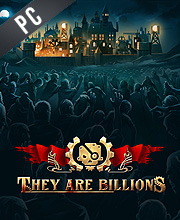 What is They Are Billions CD key?

It's a digital key that allows you to download They Are Billions directly to PC from the official Platforms.

How can I find the best prices for They Are Billions CD keys?

Allkeyshop.com compares the cheapest prices of They Are Billions on the digital downloads market to find the best sales and discount codes on trusted stores.

The world has been ravaged by a zombie apocalypse and only a few thousand humans have survived while the undead number in the billions.

The music is fantastic. The art is striking and its got that timeless comic book thing going on that means it’s probably still going to look as good in five years as it does now.

A nuanced and original take on the real-time strategy genre that even manages to make zombies interesting again. Unforgiving difficulty is balanced by the ability to pause the action.

It’s a smartly designed game at its core, despite the distractions. Just like a lone zombie can bring about your demise, sometimes one strong idea is enough.

Zoom 1m 3m 1y All
Track product
GOG.COM CD KEY : You need to register on Gog.com, then use the GOG Key to download and activate your game to play They Are Billions.
ORIGIN CD KEY : Use the Origin Key Code (Electronic Arts - EA) on Origin Platform to download and play They Are Billions. You have to login to your Origin Account or create one for free. Download and install the Origin Software HERE) then you can activate the game on it. Once installed, start Origin, click on the Origin Tab and click on Redeem Product Code and just enter the key. The game will appear in your My games list.
EU STEAM CD KEY: Requires an EUROPEAN IP address or you must activate it with a VPN (Virtual Private Network) in order to play They Are Billions. Might have languages restrictions or language packs. Read the description on the store game page to know if the EU IP is only needed for activation or for playing also (maybe on EU Servers). Most of the stores offer you their help, or show you how to do this with a tutorial to follow.
EUROPEAN STEAM GIFT : It’s a steam gift for Europe which requires an European IP address to activate and to play They Are Billions on Steam. Read carefully the store description about region and language restrictions.
STEAM GIFT : A Steam gift is a one-time transfer you receive. You activate and install They Are Billions to play on Steam, it is a non-refundable game that stays in your Steam games collection. Please read the store description about any language or region restrictions.
STEAM GIFT ROW : This a steam gift for ROW regions. It means for Rest Of the World. This product can't be purchased and activated in Several countries. Please read the store description to know the full list of countries which are concerned.
STEAM CD KEY : Use the Steam Key Code on Steam Platform to download and play They Are Billions. You must login to your Steam Account or create one for free. Download the (Steam Client HERE). Then once you login, click Add a Game (located in the bottom Left corner) -> Activate a Product on Steam. There type in your CD Key and the game will be activated and added to your Steam account game library.
Early Access
Standard Edition
Compare Choose & Buy Download (759)

pretty cool game, very original and something that i wanted from long time, a strategy game with the mechanics of supreme commander or command and conquer survival wave

Survival mode gives you full freedom in access to gameplay, and that makes it arguably the most fun part of the game.

I bought the game during it’s early access in 2017 for 9,99$ so I’ve played it a lot.
It’s a very hard game to master and also hard to learn, but It’s worth it it took me more than 70 hours to complete the first map.
The developer of this game listens to It’s community they added steam workshop which opened endless possibilities with this game.

They Are Billions is not a Tower Defence game.

I often see it compared to as such, and I think that is a bit of a lazy way to define this game. It is more akin to a classic 90s RTS with emphasis on base, economy and unit management. Oh and they are a few infected to worry about.

It is as if the developers decided they needed to take the level “Desperate Alliance” and turn it into a video game. Boy were they right on doing so. I never though such a basic concept, and ode to one of the greatest RTS games to ever exist, Starcraft 1, would be such a hit. Where a tower defence relies on you creating, and defeating a rush of an enemy through typical a maze, this does not abide to that rule as the hoard does not funnel in a way that a tower defence does, and they will chew through your towers / units without prejudice.

I genuinely feel excited for the unlimited potential this game possesses.

I find it exciting to find yourself conflicted in whether or not you fortify yourself early and turtle to the best of your abilities, or you find yourself taking the fight to the infected, burning down their nests and exploiting the map as soon as you can. Both reward and punish, all depending on circumstance.

My only few gripes are:

Sometimes the housing placement decides not to stack side by side because of “in the way” when if you redo it, it’ll work. (Does that make sense?)

Towers/ballistas not being able to shoot over trees. – perhaps its a balance thing, but common!

Unit variety & building – to keep things fresh.
Further advancement beyond veteran rank for soldiers.
Overhaul of soldiers in general – I personally feel they’re not worth it.

At the time it might be a little overpriced due to it lacking in variety so it will feel repetitive, i would like to see it at 14-15$ rather than 17$ (current price when writing the review)
It’s worth it if your stubborn.
It’s not worth it if you give up to easily or fast.

I gave it a 4 star instead of 5 because It’s repetitiveness. I get bored quickly when playing for long times. So I need to take brakes between my sessions. But that’s just me.

I’m out, peace.
Written by Emil AKA Xamm Or Sammy to Riri!