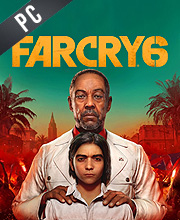 It's a digital key that allows you to download FAR CRY 6 directly to PC from the official Platforms.

How can I find the best prices for FAR CRY 6 CD keys?

Be the first one to write a review about FAR CRY 6 !

Had a great time playing it and plan to play it more.

Like always i ll wait to play this game it will be on steam at a decent price, but i m very huped!

Such a great teaser, looking forward to play this game. Already decided to purchase it here for such a good price!!

I’m very hyped for this game to come out!! Being a super fan of the series since the first game.

best game ever,probably dream to play i need to play this and win giveaway,i am not rich i lose on mozzartbet house and i do giveaway here…please i need win!