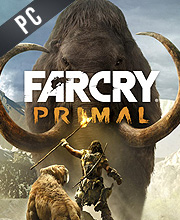 It's a digital key that allows you to download Far Cry Primal directly to PC from the official Platforms.

How can I find the best prices for Far Cry Primal CD keys?

Allkeyshop.com compares the cheapest prices of Far Cry Primal on the digital downloads market to find the best sales and discount codes on trusted stores.

Big change to the Far Cry franchise this time, the game is set in the Stone Age!

Discover Takkar the hunter and his quest to become the leader of a tribe. The story takes place in the early Mesolithic period, with an open world filled with animals of that era like mammoths and saber-toothed cats.

Take control of Takkar after his shipwreck in Oros, a freshly formed valley after the ice melt. You will need to survive without weapons and resources. Your survival is a challenge every day, because in addition to animals, other tribes enter into conflict with you and your allies. You will need to become the leader of your tribe and lead it to victory over the other tribes.

As you can guess, with a story set in prehistoric times, you will not have guns or vehicles to assist you in this adventure. You will need to handle fire, and to build your own weapons from wood crafts and stone, to create stuff like bows or spears. Of course the more you will advance in the crafts, and the more weapons will be available.

Be careful to watch your food, create fire, and also be a good tribe leader to survive. You will need to protect your people, especially at night as enemies become more dangerous and aggressive.

It is possible to tame prehistoric animals such as badgets or saber-toothed cats by giving them food, these animals will then serve you as faithful companions and they will help you fight enemies. Takkar also has a pet bird to spot enemies and highlight them.

Far Cry Primal will wake in you the Wild Man who sleeps in you, with this simulation of a prehistoric era, you will enjoy hunting and learn the craft of that time.

Become the ultimate prehistory predator with your tamed animals.

Special: Far Cry Primal + The Legend of the Mammoth (Includes 3 extra missions). (Product has been restricted to Europe.)

Going back to the Stone Age, ten thousand years BC, is a huge thing and an ambitious idea for many reasons. First, because it’s pretty much uncharted territory in games. Far Cry Primal first of all had to define what would be interesting and fun for the modern player in the Stone Age. Secondly, it is also a drastic change for the series whose games belong to the first-person shooter genre. Based on these two facts, a lion’s job was done for FC Primal.

Far Cry Primal is the worst in the whole series. I would rather play Far Cry 1 and 2 too this s@#!. That said there is a key registered for 0.88€ which I thought was hilarious because that’s about how much the game is worth. Yeah that’s is for a DLC not the base game, kind of misleading.

This is the best FarCry game before FarCry 5 game got releases.

I`ve playd for 5 hours this game but still failed to discover him in to its fullness. Great game!

Funny game, low price this is nice, thanks AllKeyShop!