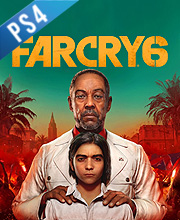 What is FAR CRY 6 Game Code?

It's a digital key that allows you to download FAR CRY 6 directly to Playstation 4 directly from PSN (Playstation network).

Be the first one to write a review about FAR CRY 6 !

Easy purchase because Is the best game in the world

Far Cry saga is great, this new part could be one of the best.