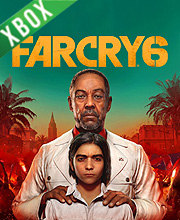 What is FAR CRY 6 Game Code?

It's a digital key that allows you to download FAR CRY 6 directly to Xbox One directly from Xbox Live.

How can I find the best prices for FAR CRY 6 on Xbox one?

Game looks okay and I'm thinking of buying it.
Can't wait for it to come out.

I am big fan of far cry series.. hope one day i’ll get this also

It has really wonderful trailer. I hope the game will greatest one on far cry series

Own every FC game, and i am waiting for this one to get out. Of course i will bought it here becausehere i can find the lowest prices! recommended!

Far Cry is a good franchise, and it’s even better that it’s an open world .. I hope FC6 will be better than last.