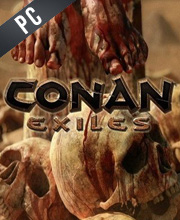 What is Conan Exiles CD key?

It's a digital key that allows you to download Conan Exiles directly to PC from the official Platforms.

How can I find the best prices for Conan Exiles CD keys?

Broad in shoulder, wide in scope, rough around the edges. Nevertheless, an enjoyably meaty survival game.

Play it as a single-player experience and it will evoke memories of Minecraft, while as a co-op game, with its respawning mobs, thinly spread content and raid-like endgame, you might just catch the glimmer of an old school MMORPG, reminding you, just a little, of when the genre was a metaverse of uncharted promise.

We should congratulate Funcom for turning this one around, and transforming a mess of survival sim into something that’s part Ark, part Minecraft and part MMO, and that’s actually accessible and fun by the standards of its genre.

The Complete Edition bundles the base game with all 10 DLC packs released so far — Architects of Argos, Riders of Hyboria, Debaucheries of Derketo, Blood and Sand, The Riddles of Steel, Treasures of Turan, Seekers of the Dawn, The Savage Frontier, Jewel of the West, and The Imperial East. These DLC packs amount to hundreds of in-game items in total and includes building pieces, weapons, armor pieces, pet skins, warpaints, placeables and licensed items from the movie.

EPIC GAMES KEY : Region Free / Worldwide. Requires Epic Games Launcher App in order to play the game. You need to create a free account here in order to download Conan Exiles from Epic Plateform . Read the description on the store page about any language or country restrictions.
STEAM EMEA KEY : What is Steam Key EMEA signification? EMEA means for Europe, Middle East and Africa and several other countries. Please read the store description about country and language restrictions to know which are concerned. Use the key to Download and play Conan Exiles on Steam.
EU STEAM CD KEY: Requires an EUROPEAN IP address or you must activate it with a VPN (Virtual Private Network) in order to play Conan Exiles. Might have languages restrictions or language packs. Read the description on the store game page to know if the EU IP is only needed for activation or for playing also (maybe on EU Servers). Most of the stores offer you their help, or show you how to do this with a tutorial to follow.
EUROPEAN STEAM GIFT : It’s a steam gift for Europe which requires an European IP address to activate and to play Conan Exiles on Steam. Read carefully the store description about region and language restrictions.
STEAM GIFT : A Steam gift is a one-time transfer you receive. You activate and install Conan Exiles to play on Steam, it is a non-refundable game that stays in your Steam games collection. Please read the store description about any language or region restrictions.
STEAM CD KEY : Use the Steam Key Code on Steam Platform to download and play Conan Exiles. You must login to your Steam Account or create one for free. Download the (Steam Client HERE). Then once you login, click Add a Game (located in the bottom Left corner) -> Activate a Product on Steam. There type in your CD Key and the game will be activated and added to your Steam account game library.
STEAM KEY ROW : It means for Rest Of the World countries which are not concerned by the region restrictions. This product can't be purchased and activated in Several countries. Please read the store description to know the full list of countries which are concerned. Use the key to Download and play Conan Exiles on Steam.
Complete Edition
Dayone Edition
Deluxe Edition
Early Access
Isle of Siptah Edition
Standard Edition
Compare Choose & Buy Download (710)

I have this game since a long time ago, but I’ve not played yet. It has too many expensive DLC’s…

Its a nice survival game, I wanted to play it on epic becaus it reminds of Rust and Ark of survival.. but sadly will not be free anymore.. and I am thinking on buying it !

Wasn’t this game supposed to be free on Epic store at some point?

Epic decided that the game won’t be free and will be available for purchase at the store at a later date. You can check epic’s official website for any info regarding the game.

Very fine game, I heared it was planned to be free on Epic, but no.