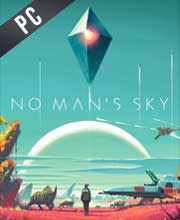 What is No Man's Sky CD key?

It's a digital key that allows you to download No Man's Sky directly to PC from the official Platforms.

How can I find the best prices for No Man's Sky CD keys?

Allkeyshop.com compares the cheapest prices of No Man's Sky on the digital downloads market to find the best sales and discount codes on trusted stores.

Enter an infinite procedurally-generated universe where each star holds a solar system waiting to be discovered and explored.

All things considered, No Man’s Sky is the first game in years to actually justify the use of the word “ambitious”. That’s why I like it.


Sean Murray and his team at Hello Games set out with one goal: to create a game that is science fiction. Mission accomplished.

Enormous game world is a pleasure to explore even when you know all its tricks. Competent space and land combat. Excellent art design and soundtrack.

STEAM CD KEY : Use the Steam Key Code on Steam Platform to download and play No Man's Sky. You must login to your Steam Account or create one for free. Download the (Steam Client HERE). Then once you login, click Add a Game (located in the bottom Left corner) -> Activate a Product on Steam. There type in your CD Key and the game will be activated and added to your Steam account game library.
EU STEAM CD KEY: Requires an EUROPEAN IP address or you must activate it with a VPN (Virtual Private Network) in order to play No Man's Sky. Might have languages restrictions or language packs. Read the description on the store game page to know if the EU IP is only needed for activation or for playing also (maybe on EU Servers). Most of the stores offer you their help, or show you how to do this with a tutorial to follow.
STEAM GIFT : A Steam gift is a one-time transfer you receive. You activate and install No Man's Sky to play on Steam, it is a non-refundable game that stays in your Steam games collection. Please read the store description about any language or region restrictions.
STEAM KEY ROW : It means for Rest Of the World countries which are not concerned by the region restrictions. This product can't be purchased and activated in Several countries. Please read the store description to know the full list of countries which are concerned. Use the key to Download and play No Man's Sky on Steam.
EUROPEAN STEAM GIFT : It’s a steam gift for Europe which requires an European IP address to activate and to play No Man's Sky on Steam. Read carefully the store description about region and language restrictions.
Windows 10 Global : This is an Worldwide Microsoft code to play on PC for Worldwide . You need to have installed Windows 10 Anniversary Edition update on your PC. Log into your Microsoft account to download and play. Read closely the description given by the store to activate your game.
GOG.COM CD KEY : You need to register on Gog.com, then use the GOG Key to download and activate your game to play No Man's Sky.
Standard Edition. Read the store description to know the content.

There’s little chance that No Man’s Sky will turn into a solid exploration adventure in the future if the game is still being worked on. Until then, however, it is far smarter and more fun to read The Liattle Prince, at least several times in a row

Let's face it, No Man's Sky didn't really manage to meet the playerbase's expectations on release. But since then, years have passed and the fine folks at Hello Games have released tons of FREE content and improvements over multiple fine tuned updates. At this point, I can safely say, the game has turned into a solid gameplay experience, as the Devs are still providing continuous support and are working on new content! Props for they decisions to stick to the game and make it what it is today, instead of just disappearing with what they made initially with all the funding from pre-purchases and early release hype. I definitely recommend to give this one a go! As a final verdict, I would rate it as 4.5/5

I purchased it thanks to AKS! ✅
"Bear in mind that the developers lost much of their work during a flood"
I played the first version in 2016 and i can assert, that as soon as it was released, it was a complete disappointment. Yes it has improved a lot since that time, and many big updates continue to come out during the year with free update, fair, since they are elements that had to be present at release, IMHO it's not enough, after 4 years, still an half game.
It's a game that evolving over the years, but the main things are only messed up, never settled.

With its possibilities, it could offer very, very fun, and arouse charm. Unfortunately with every update, expectations are mathematically disappointed.
The developers focus too much on bull***t, instead there would be many things to fix, or better ideas to develop! They insert objects like the exoskeleton, useless and ugly as design, the music creation system, embarrassing, and useless in a game of this type.
Sure they gave the VR, or multiplayer, but everything is artifact.
Everything appears for what it is, a plastic game without many possibilities to do
I can't gather much fun, there is always some aspect that limits, or disappoints,
my need to develop fantasy, or need to do.


I find it suitable only for casual gamesr, not for medium or hardcore gamers.
Who plays massively will notice that, it's good only on the surface...after a global observation is a "universal" disappointment, an entire space, FULL of nothing to do.
I have played it a lot, not because is a good game, but because "right now" its the only one that offer a good level of space exploration. (even if I mean other things by exploration.)

The fact remains, at the moment it's the only game that offers certain posibilities so i give it 2 star and half.

THE GOOD
+Explortaion = Is the Key of this game, but it all starts and ends with this aspect.

THE BAD
-Design = Everything seems thrown there, rough, from characters to spaceships, terrain and flora.
It's true that creatures/fauna/ships are self generated but the basic models have been modeled, I can assert that the modelers chosen are not good. They haven't studied character design, the characters are hideous with grotesque features. This could be interesting cometimes, but this is not the case ... these living nightmares, try to create sympathy, instead, they will crowd your nightmares. Everythingseem designed by elementary school childrens
The spaceships, in most cases are trivial, some really decent, but without going on the photorealistic, i would have liked more effort.

-Visual Style = With a good video card, it can be visually fascinating at first glance, after a while the choice of psychedelic colors becomes boring.
It may seem to you, like my personal opinion, but it's not. I love cartoon design, unreal, imaginative, so i should like NMS, at first sight yes, but looking better, i notice a lot of approximation, especially in the characters of the aliens, and in the design of vegetation/terrain etc.

-Story= Even if there is a "story" if we want, it is not well developed it is very patchy, and many players do not follow it almost, there is a goal, to get to the center of the galaxy, which can be achieved by following this sort of story.

-Dev Team = Developers, are concentrate on adding new stupid things, to attract casual gamers, or streamers. Instead of what it really would be nice to see.

-Bugs = There are, some make it impossible, to create the foundations, but they are not too serious so. I don't want to talk about bugs, in now days games, bugs are present in every game, and nobody, from indie, to triple A developers, ever cares about them when they deserve.

I pre-ordered this back in 2016 and just now jumped back in after hearing all the good things people say about it. I have to say, your channel is refreshing. I don’t know how long you’ve been doing it, I see your subs are low but you keep this up, and it won’t be low for long

Great game if you are into exploring and sandbox, but not so great if you’re looking for a story. At least the developers added multiplayer, though too late since the hype is long over.

nice game, only downside is forced multiplayer. would be more fun if you could make it friend-only or something. but graphically it is stunning