15 of the Best Medieval Games and Compare Prices

“You want to play a Medieval Games, but don’t know which one to choose?

Luckily Allkeyshop is here to help you with this top 15 of the best Medieval Games!”

Immerse yourself in a non-linear epic adventure set in the Holy Roman Empire. Use distance, melee, and stealth to kill your foes in the challenging combat system. The game features a classless role-playing system, giving you complete control over your skills, perks, and upgrades.


Create and develop your character the way you want to, then explore, raid and conquer your way across a continent in this open-world medieval strategy. Enjoy an incredible single-player campaign or test your multiplayer skills in breathtaking battles that feature skill-based directional medieval combat.

As a Northman trade, invade and devote your life to the gods as you build your settlement on the new continent of Northgard. Assign your Vikings to jobs such as farmer, sailor, or warrior, and manage your resources to get through the harshest winter that you have known. Play against the AI or friends, and head online to climb the ranks and become a Norse God.


Build a new home in a war-torn Middle Ages land and carve your own destiny that will continue for generations to come. Begin with nothing and learn to hunt, craft, farm, and cook. Build your single home into a thriving village full of others who work, hunt, and fight for you. Survive the winter months, rule your land however you want, and create a home for you and your family.


Enter fast-paced medieval battles and experience castle sieges, cavalry charges, and brutal multiplayer melee action. Fight with more than 70 weapons including hammers, spears, swords, two-handed swords, maces, quarterstaffs, and bows in all-out war game modes such as Frontline and Battle Royale. Character creation gives you full control with you able to sculpt your face, create your weapons from parts, and pick out individual pieces of armor to create the warrior that you want.

Ruin your friends and end friendships in Shellshock Live, a tactical online multiplayer artillery game with up to 8-player support. Unlock and upgrade hundreds of unique weapons, utilize tanks, items, destructible maps, and playstyles, and earn experience to rise through 100 ranks to prove your dominance on the battlefield.


Enter the stunning world of a built-for-VR medieval fantasy and become the powerful warrior your enemies will fear. Blade and Sorcery features a unique physics-driven melee system with collisions dictated by fine hitboxes, and objects having a weight that follow the rules of physics. Currently, in Early Access, the game boasts five maps, more than ten weapons, three spells, avatar customization, jumping, kicking, running, climbing, and advanced modding. Upon release, the game is expected to have a player inventory, a skill tree, new enemy types, new content, and full modding.

The darkest time in history comes to life in this tale of disease, horror, struggle, and adventure. Escape the Inquisition using stealth, avoid the swarms of rats that relentlessly devour anything in their path, and keep in the light in a France ravaged with death and tragedy.


Lead your people and settle them in a wilderness rich in resources. Guide your settlers through their day and transform your tiny village into an advanced civilization. Enjoy endless replayability with randomly generated worlds, and compete online in real-time multiplayer.

Build and manage your very own medieval graveyard while expanding into other ventures and finding shortcuts to keep costs down. Gather resources, craft items, utilize corpses for other means, explore dungeons, and make questionable decisions that will have long-lasting effects on the nearby village.

Battle your way through a physics-based building game with purpose-made siege engines. You can tackle dozens of single-player scenarios or tackle levels together to complete objectives. You can share and download machines, skins, and levels via Steam Workshop.


Enter the arena and take part in blood-soaked gladiatorial combat, all in virtual reality, in GORN. Featuring a unique, fully physics driven combat engine, tear limbs, decapitate, and break bones as you fight your way to victory. Wield deadly weapons, such as swords, maces, bows, nunchucks, throwing knives, two-handed warhammers, or even your bare hands. Smash your way through endless enemies or customize your arena and your enemies to fight in truly ludicrous situations.

14. ENDER LILIES: Quietus of the Knights


Explore a dark 2D fantasy and kill powerful foes to release them from their curse. Uncover secrets of Land’s End, utilize melee, ranged, and magic attacks, and choose the abilities to best suit your playstyle. Fight alongside your knights and learn to attack and evade with precision.


Fight for victory in this highly detailed turn-based strategy game, with more than 1000 unique units, each modeled and animated. Take control of all the European theatre’s major powers and battle in dozens of scenarios across multiple offline and online game modes. Once done with the campaign, take advantage of the in-game editor to create your own scenarios or download others for unlimited replayability.

What is a Medieval Game? 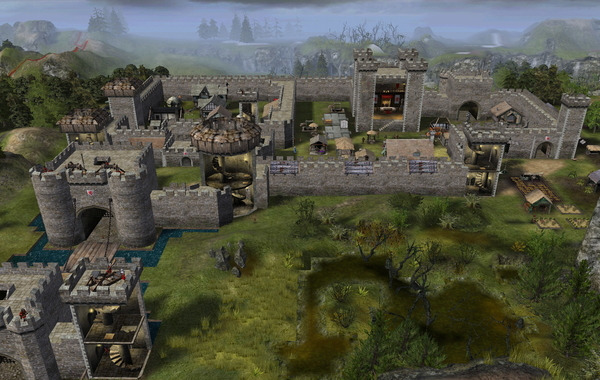 Games set in the Middle Ages feature the architecture, weapons, tools, and diseases found in the medieval period.

Often, the challenge in these games focuses on the lack of cultural and scientific advancements.

Why Are We Doing a Top 15 Medieval Games List?

Medieval Games are available at incredible prices, but with so many to choose from, we want to help you pick the game that’s right for you.