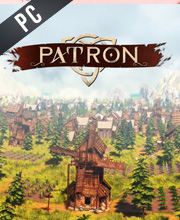 What is Patron CD key?

It's a digital key that allows you to download Patron directly to PC from the official Platforms.

How can I find the best prices for Patron CD keys?

Allkeyshop.com compares the cheapest prices of Patron on the digital downloads market to find the best sales and discount codes on trusted stores.

Patron is a City Builder/Colony Simulator developed by Overseer Games it’s vaguely set in a pseudo-Early Modern era of human history. Influenced by many survival city builder games who came before it, Patron seeks to innovate the genre by combining two core ideas a complex city sim with a lot of moving parts and the introduction of an intricate social dynamics system, for example, happiness in some games it’s just a meter that goes up and down, but in Patron, it has its own complete gameplay system. Each Citizen in your village has his own needs, desires, and issues making them happy or unhappy.

Patron is effectively a more difficult version of Banished. But there are enough subtle differences to differentiate them and the game’s overall polish is fantastic. Some outlying issues need addressing but the developers have shown themselves to be passionate and willing to take feedback.

Patron is an ambitious game, working hard to stand out in a genre that is saturated with countless clones of each other. The social system is intricate, although I think it still has some work to be done to make it feel as massive as Overseer Games would like it to be. Still, there is a lot to like about Patron, and it is a perfectly enjoyable city builder.

This DLC is for people who want to support the developers of Patron and Patron itself, it contains several in-game items and a printable logo.

Zoom 1m 3m 1y All
Track product
GOG.COM CD KEY : You need to register on Gog.com, then use the GOG Key to download and activate your game to play Patron.
EU STEAM CD KEY: Requires an EUROPEAN IP address or you must activate it with a VPN (Virtual Private Network) in order to play Patron. Might have languages restrictions or language packs. Read the description on the store game page to know if the EU IP is only needed for activation or for playing also (maybe on EU Servers). Most of the stores offer you their help, or show you how to do this with a tutorial to follow.
EUROPEAN STEAM GIFT : It’s a steam gift for Europe which requires an European IP address to activate and to play Patron on Steam. Read carefully the store description about region and language restrictions.
STEAM GIFT : A Steam gift is a one-time transfer you receive. You activate and install Patron to play on Steam, it is a non-refundable game that stays in your Steam games collection. Please read the store description about any language or region restrictions.
STEAM CD KEY : Use the Steam Key Code on Steam Platform to download and play Patron. You must login to your Steam Account or create one for free. Download the (Steam Client HERE). Then once you login, click Add a Game (located in the bottom Left corner) -> Activate a Product on Steam. There type in your CD Key and the game will be activated and added to your Steam account game library.
Standard Edition
Supporter Bundle
Ultimate Bundle
Compare Choose & Buy Download (772)