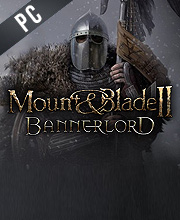 What is Mount and Blade 2 Bannerlord CD key?

It's a digital key that allows you to download Mount and Blade 2 Bannerlord directly to PC from the official Platforms.

How can I find the best prices for Mount and Blade 2 Bannerlord CD keys?

Allkeyshop.com compares the cheapest prices of Mount and Blade 2 Bannerlord on the digital downloads market to find the best sales and discount codes on trusted stores.

Mount & Blade II: Bannerlord is an action, simulation strategy, role-playing video game that is developed and published by TaleWorlds Entertainment. This is the prequel to 2010’s Mount & Blade: Warband.

Set 200 years before the events of Mount & Blade: Warband during the fall of the Calradian Empire. You must build up a new world out of the ashes of the old.

The game is a medieval combat simulator and a role-playing game as well. The defensive structures in the game are historically authentic to give its players an epic medieval warfare experience.

Ready your machinery, as well as your troops as the game, will definitely test your skill as well as your wits. Engage in diplomacy in order to get peace and an ally when fighting your foes.

Crafting is also available in the game. Get to craft your very own weapons which you can name as well. Make sure to keep the attributes of your weapon to the optimal to create a very mean killing machine.

Modding is also allowed in the game so modders are free to try their ideas too!

Will you end up victorious in Mount & Blade II: Bannerlord?

That how i would describe this game and there are actually a lot of words for the game to exactly describe what it really is. Basically you start out as an unknown guy that has a backstory based on the character creation on where you select different options for your character.

When you start the game you are the only person in a big world where you can freely travel to cities, towns, bandit camps, and castles but look out for dangers on the map. You need to grow an army by buying units from towns, upgrade those units by fighting looters and other small bandits on the map, or you can do quests to help villagers and gain reputation.

The bigger your army and the more reputation you earn let's you join factions over the world and get in wars with large armies; for example 900 vs 800 units and they can all be seen in the fights so be prepared for an amazing sight when you get in those battles. There is also castle sieging with siege equipment and that is also a really nice and impressive spectacle to see.

When you capture a castle or town the nation leader can vote for who can own it and you can use your reputation to vote for yourself and then you can control it ( it will anger the other lords ). And suddenly you are controlling a castle where you have to build things and maintain the small villages around it.

There is still so much more to type about this game and it's in early access. If you want a game where you make the decisions and build up to something from the ground and be your own king then this is a lot of fun.

The game also has multiplayer with skirmish battles and castle sieges with a lot of people. But i have not played it that much to write how good it is so i leave that out for now but it was fun for the few matches i did.

Is this game worth it? Well it's not finished yet -- it's in early access but they plan to release it in a year's time.

great graphics and even greater graphics, it just excells and doesnt fail to show!

Mount and Blade 2 Bannerlord is a giant strategy game with role play elements. Huge map, lots of cities to rule, create big armies to command. This is an awesome middle age with your own story.

Best medieval sand-box game i have ever seen. I would definitely recommend you to try it

It’s like mount and blade warband but better. There are a lot of bugs tho

the game got big updates recently, will come back to it.