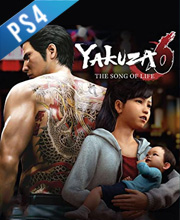 What is Yakuza 6 The Song of Life Game Code?

It's a digital key that allows you to download Yakuza 6 The Song of Life directly to Playstation 4 from PSN (Playstation network).

Allkeyshop.com compares the cheapest prices of Yakuza 6 The Song of Life on the digital downloads market to find the best sales and discount codes on trusted stores.

Yakuza 6: The Song of Life is a single-player, action–adventure video game that is played in a third person perspective. It is developed and published by SEGA for the PlayStation 4. This is the seventh main entry in the Yakuza series and was first released in Japan.

Hospitalized Kazuma Kiryu was still recovering from his injuries from the previous game, he was approached by the police with plans of putting him into custody due to his past crimes. Kiryu chose not to resist the arrest and spent three years in prison in order to live peacefully with the children he had fostered.

Upon his release, he learned that Haruka has gone missing. Kiryu, in his efforts to search for Haruka, came to Kamurocho, only to find out that she was left in a coma after a hit and run incident. She was pregnant at that time and was able to deliver the baby safely which she named, Haruto. Kiryu, unsure if Haruka will recover from her coma and injuries traveled to Onomichi Jingaicho together with the baby in search of the mystery that happened to Haruka during his three-year absence.

Get to enjoy exploration as well as arcade-style over the top combat that the Yakuza games are known for!