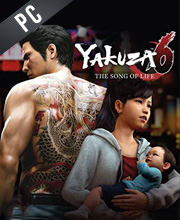 What is Yakuza 6 The Song of Life CD key?

It's a digital key that allows you to download Yakuza 6 The Song of Life directly to PC from the official Platforms.

How can I find the best prices for Yakuza 6 The Song of Life CD keys?

Allkeyshop.com compares the cheapest prices of Yakuza 6 The Song of Life on the digital downloads market to find the best sales and discount codes on trusted stores.

Yakuza 6 The Song of Life is an all-new entry in the Yakuza game franchise. A game that packs a bloody fighting role-playing game in the criminal underworld of Japan. Following the story of a legendary yakuza and brawler, Kazuma, who will find answers to what happened to his daughter. Explore the world of Yakuza like never before. Mixing felonies, explosive combat, and every crime connected to the Japanese Mafia.

As a swansong, the RGG team has crafted something that is absolutely befitting of the stoic hero who has carried the series for since 2005. It would’ve been easy to have this be the most bombastic entry of the series and have all the series fan favorites show up, however the fact that a majority of characters involved are mostly new allows you to really focus on Kiryu’s final story. We’re not gonna sugar coat that a new hero has already risen and has held his own, however it is heartening that the series has gotten enough support that it has finally escaped the PlayStation ecosystem and can be enjoyed by gamers everywhere!

EU STEAM CD KEY: Requires an EUROPEAN IP address or you must activate it with a VPN (Virtual Private Network) in order to play Yakuza 6 The Song of Life. Might have languages restrictions or language packs. Read the description on the store game page to know if the EU IP is only needed for activation or for playing also (maybe on EU Servers). Most of the stores offer you their help, or show you how to do this with a tutorial to follow.
STEAM GIFT : A Steam gift is a one-time transfer you receive. You activate and install Yakuza 6 The Song of Life to play on Steam, it is a non-refundable game that stays in your Steam games collection. Please read the store description about any language or region restrictions.
STEAM CD KEY : Use the Steam Key Code on Steam Platform to download and play Yakuza 6 The Song of Life. You must login to your Steam Account or create one for free. Download the (Steam Client HERE). Then once you login, click Add a Game (located in the bottom Left corner) -> Activate a Product on Steam. There type in your CD Key and the game will be activated and added to your Steam account game library.
STEAM KEY ROW : It means for Rest Of the World countries which are not concerned by the region restrictions. This product can't be purchased and activated in Several countries. Please read the store description to know the full list of countries which are concerned. Use the key to Download and play Yakuza 6 The Song of Life on Steam.
Windows 10 Global : This is an Worldwide Microsoft code to play on PC for Worldwide . You need to have installed Windows 10 Anniversary Edition update on your PC. Log into your Microsoft account to download and play. Read closely the description given by the store to activate your game.
Standard Edition
Compare Choose & Buy Download (689)