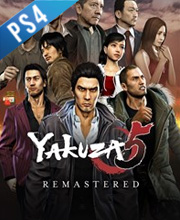 What is Yakuza 5 Remastered Game Code?

It's a digital key that allows you to download Yakuza 5 Remastered directly to Playstation 4 from PSN (Playstation network).

Allkeyshop.com compares the cheapest prices of Yakuza 5 Remastered on the digital downloads market to find the best sales and discount codes on trusted stores.

Yakuza 5 Remastered is a rerelease of the original Yakuza 5 for the PS3 developed by SEGA’s in-house development team Ryu Ga Gotoku responsible for all Yakuza games. The remastered version doesn’t change anything major from its PS3 counterpart aside from localization updates, and graphical improvements. The story picks up right after the events of Yakuza 4, The Dragon of Dojima has left the world of crime for good, and is now hiding his identity and spending his days as a cab driver in Fukuoka’s red-light district, but it looks like another yakuza war is brewing in the horizon, in order to save the dreams of his loved ones he must step into the world of crime once again and do some more butt-kicking.

Yakuza 5 is considered a high-water mark for the series, and it’s easy to see why. I’ve rarely seen a game that packs in so much content, even compared to the other installments of the series which are bursting with side quests and mini-games. Though the story loses some of its focus in the final chapter (a recurring issue with most Yakuza games), it still keeps you engaged from beginning to end.

Ultimately, these changes, as well as the visual and mechanical upgrades, make Yakuza 5 Remastered a better game than the original release. If you’re a newcomer to the series and have never experienced the beautiful story of this title, then this is a must-play.

This Edition contains the Collection Edition, three remastered games from the PS3 era of Yakuza.