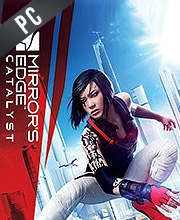 It's a digital key that allows you to download Mirror's Edge Catalyst directly to PC from the official Platforms.

How can I find the best prices for Mirror's Edge Catalyst CD keys?

Allkeyshop.com compares the cheapest prices of Mirror's Edge Catalyst on the digital downloads market to find the best sales and discount codes on trusted stores.

Mirror’s Edge Catalyst is a platform/course game developed by DICE and published by Electronic Arts.

The player is Faith, a young woman with an incredible force. Many new very realistic movements are emerging. The combat phases have also been reworked and are much more extensive and more fluid than the first game.

The game’s story is set in the past of the previous installment (Mirror’s Edge) in an open world in the sense that there are various possible routes. If you want to be faster, you will need to take more difficult and more dangerous routes. DICE wanted to offer that choice so that everyone can have fun, from simple casual players to players seeking to challenge and perfect themselves.

Mirror’s Edge Catalyst runs on the Frostbite Engine 3. The game was made with great care to detailing and the graphical rendering is simply stunning!

The dynamics and realism of the game is incredible. If you liked the previous game, expect to enjoy this one!

Great game. Super satisfying. With great combat compared to the original. The open world is a bit disappointing, but the game does look stunning

I remember when the first mirrors edge came out, was a stunning game

Run, leap and fight your way to freedom in the city of Glass. Get ready to hit the ground running in this fast-paced, free-running adventure with stunning visuals, nice game.

Good game, nice and funny gameplay. For this price is gift!