15 of the Best War Simulation Games and Compare Prices

“You want to play a War Simulation Games, but don’t know which one to choose?

Luckily Allkeyshop is here to help you with this top 15 of the best War Simulation Games!”

Take command of any nation in World War 2 and lead that nation to victory in the most engaging conflict in history. Experience total strategic war, winning over land, air, and sea. Use diplomacy, engage in trade for resources or simply battle your way to victory in snow, mud, and storms. You can shape the world in the wonderfully realistic single-player campaign or head online in competitive or cooperative multiplayer in 32 player cross-platform action.

Squad is an authentic shooter with two teams of 50 players face-off in realistic combat across 20 unique maps. Communicate with your squad, work together, and fight the enemy using realistic weapons, vehicles, and anti-personnel equipment such as razor wire and sandbags. Experience the most realistic combat in a video game yet, with split-second decisions and large-scale intense action.

Create and develop your character the way you want to, then explore, raid and conquer your way across a continent in this open-world medieval strategy. Enjoy an incredible single-player campaign or test your multiplayer skills in breathtaking battles that feature skill-based directional medieval combat. Create your character, improve skills through actions, and master perks. Customize the game however you want with in-game tools and share your modded creations with the community.

Join an epic conflict across ancient China and experience the gripping turn-based campaign the series is famous for in this latest real-time battle title. Explore ancient China like never before and forge a new empire as one of twelve legendary Warlords. See those Warlords come to life with their unique personalities and motivations, and watch them form deep relationships. Form powerful allies or enemies, recruit heroic characters, defeat your enemies with your military, politics, technology, and economy. Commit treachery, betrayals, and experience glorious conquest as you write your legend.

Take to the skies and engage in aerial dogfights through photorealistic skies in the latest Ace Combat title. The game takes realism to the next level with dynamic weather that affects your aircraft, realistic HUD, realistic stories, and intense dogfights that you can only find in the Ace Combat franchise.

Set in World War 2, take control of a desperate crew as they fight against the enemy and the boat that threatens to fail them. Learn to use your resources smartly, preserving oxygen when needed and shutting down unnecessary devices. Keep your crew’s morale high with games and entertainment, and complete seemingly impossible tasks to earn rewards and upgrades. Every play-through is unique, and it is up to you to keep your boat moving and your crew alive.

Fight in 64-player battles as the US, South Vietnam, North Vietnam, or the Viet Cong across more than 20 maps and multiple game modes. Use more than 50 weapons, avoid traps, use tunnels, fly helicopters, and discover the true devastation of a napalm strike.

The battlefield is your playground where you can choose the armies, location, and scale. Choose to put 10,000 chickens against 10,000 orcs, maybe Romans against Trolls. It’s your battlefield and your rules. You can simply sit back and watch the chaos unfold or jump in and control one character as you experience the fight up close and personal during battle.

Play as a commander and destroy everything in massive battles featuring planes, tanks, buildings, and forests. Fight through the campaign and change the history of World War 2, or head online and battle for supremacy in Deathmatch and VIP modes. The game features more than 200 units, over 50 unique maps, gradual vehicle damage, and physics-driven destruction.

Rewrite the history of World War 2 with a dynamic campaign that ensures every playthrough is unique. Build a supply and reinforcement line, ensuring vital emergency items and vehicles can make it to your troops. Plan your strategy, reveal your enemy in the Fog of War, upgrade your headquarters, and use special abilities to gain the advantage and change the war’s outcome.

Enter the war between NATO and Syrian forces in harsh environments and highly realistic 1:1 combat. Fight against infantry, armored units, terrorists, spies, suicide bombers, and other modern-day combat forces. Play in real-time or fight in turns via email or hot-seat. Enjoy endless replayability with map and scenario editors and the ability to create campaigns.


Take command of a squad and battle for the glory of Rome and Caesar. Fight in dynamic battles, controlling troops or a single character. Lay siege to enemy castles and defend your own in 2-4 team matches. The campaign follows real events and battles of those of Caesar himself.

Play as the German forces during World War 2 and explore “what if” as you claim victory in Europe. Defeat your enemies in turn-based combat and experience real events of the war as you take to the skies, land, and sea. Customize your troops, select skills, and increase the efficiency of your forces through unlocks and rewards.

What is a War Simulation Game?

A war simulation is a type of video game that realistically presents warfare, placing the player in command of a squad, army, or nation. 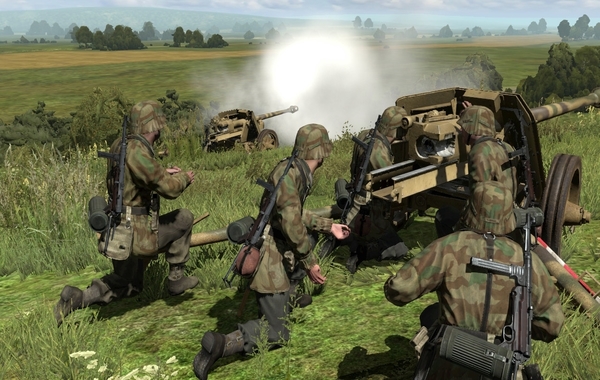 In a war simulation, players will need to manage resources, troops, and supplies.

Those games that fit within the grand strategy genre allow the player to raise taxes, arrange marriages, seek diplomacy, and build and develop cities to increase power and influence.

Why Are We Doing a Top 15 War Simulation Games List?

War Simulation Games are available at incredible prices, but with so many to choose from, we want to help you pick the game that’s right for you.