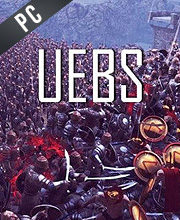 It's a digital key that allows you to download Ultimate Epic Battle Simulator directly to PC from the official Platforms.

How can I find the best prices for Ultimate Epic Battle Simulator CD keys?

Allkeyshop.com compares the cheapest prices of Ultimate Epic Battle Simulator on the digital downloads market to find the best sales and discount codes on trusted stores.

The game is a battlefield simulator that allows the players to simulate large scale battles that has hundreds and thousands of units. There are also some odd warriors to choose from like trolls, orcs, penguins, chickens, and even Santa Clause.

The game did say that it can accommodate a large scale of units, the recommended amount right now is 10,000 for those who has insanely powerful computers can have more.

Each warrior does have unique attacks. Although the attacks may not seem fair as compared to the other warriors, that is where the game’s characteristic humor takes place.

There are a lot of battle environments to choose from. There are green fields, deserts, winter scenarios and even mountain top. Every single are one gives a great overview of the battles.

The game runs in a powerful engine that allows high-quality three-dimensional graphics that is very impressive.

Play the Ultimate Epic Battle Simulator and get to enjoy this Sandbox game like no other.

Zoom 1m 3m 1y All
Track product
EU STEAM CD KEY: Requires an EUROPEAN IP address or you must activate it with a VPN (Virtual Private Network) in order to play Ultimate Epic Battle Simulator. Might have languages restrictions or language packs. Read the description on the store game page to know if the EU IP is only needed for activation or for playing also (maybe on EU Servers). Most of the stores offer you their help, or show you how to do this with a tutorial to follow.
EUROPEAN STEAM GIFT : It’s a steam gift for Europe which requires an European IP address to activate and to play Ultimate Epic Battle Simulator on Steam. Read carefully the store description about region and language restrictions.
STEAM GIFT : A Steam gift is a one-time transfer you receive. You activate and install Ultimate Epic Battle Simulator to play on Steam, it is a non-refundable game that stays in your Steam games collection. Please read the store description about any language or region restrictions.
STEAM CD KEY : Use the Steam Key Code on Steam Platform to download and play Ultimate Epic Battle Simulator. You must login to your Steam Account or create one for free. Download the (Steam Client HERE). Then once you login, click Add a Game (located in the bottom Left corner) -> Activate a Product on Steam. There type in your CD Key and the game will be activated and added to your Steam account game library.
Early Access
Standard Edition
Compare Choose & Buy Download (759)