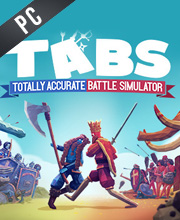 It's a digital key that allows you to download Totally Accurate Battle Simulator directly to PC from the official Platforms.

How can I find the best prices for Totally Accurate Battle Simulator CD keys?

Allkeyshop.com compares the cheapest prices of Totally Accurate Battle Simulator on the digital downloads market to find the best sales and discount codes on trusted stores.

Totally Accurate Battle Simulator or TABS is a simulation strategy video game that is developed and published by Landfall.

Offering a wacky physics-based tactics game where there are two sides of opposing teams. Each side will place their units in their desired places on their side of the field. After that, when both sides are done, the ‘start’ button will signal each side to attack each other. The victor is announced when one of the sides had been killed off.

The game comes with different campaigns as well as different maps. It also comes with a sandbox mode. By exploring the available maps, players are able to unlock new units as well as find new weapons.

Custom Battles are also available via the workshop and you can invite friends to play in these battles.

Get to create the greatest battles in history, as you battle through the ages with Totally Accurate Battle Simulator (TABS).

EPIC GAMES KEY : Region Free / Worldwide. Requires Epic Games Launcher App in order to play the game. You need to create a free account here in order to download Totally Accurate Battle Simulator from Epic Plateform . Read the description on the store page about any language or country restrictions.
EUROPEAN STEAM GIFT : It’s a steam gift for Europe which requires an European IP address to activate and to play Totally Accurate Battle Simulator on Steam. Read carefully the store description about region and language restrictions.
STEAM GIFT : A Steam gift is a one-time transfer you receive. You activate and install Totally Accurate Battle Simulator to play on Steam, it is a non-refundable game that stays in your Steam games collection. Please read the store description about any language or region restrictions.
STEAM CD KEY : Use the Steam Key Code on Steam Platform to download and play Totally Accurate Battle Simulator. You must login to your Steam Account or create one for free. Download the (Steam Client HERE). Then once you login, click Add a Game (located in the bottom Left corner) -> Activate a Product on Steam. There type in your CD Key and the game will be activated and added to your Steam account game library.
PC Win 10 / Xbox Key : This is a Microsoft Xbox Play Anywhere code to play on PC and Xbox One and XBOX X|S. You need to have installed Windows 10 Anniversary Edition update on your PC or the latest update on your Xbox console. Log into your Microsoft account to download and play. Read closely the description given by the store to activate your game.
Standard Edition