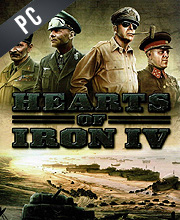 What is Hearts of Iron 4 CD key?

It's a digital key that allows you to download Hearts of Iron 4 directly to PC from the official Platforms.

How can I find the best prices for Hearts of Iron 4 CD keys?

Allkeyshop.com compares the cheapest prices of Hearts of Iron 4 on the digital downloads market to find the best sales and discount codes on trusted stores.

The fourth installment of the Hearts of Iron strategy series. War is upon us, are you willing you lead your nation to glorious victory or be the sad casualties of war?

Hearts Of Iron 4 manages to surpass its only rival in this sector, Hearts of Iron III, delivering the best strategy experience available, from your armchair.

Hearts of Iron IV is an easy recommendation for grand strategy fans of all ages and encourages them to take the time to figure everything out. There are some issues including the lack of popups, flavor events and opacity as to what the other AI players are trying to accomplish, but these things are rather small complaints in the grand scheme of things considering the overwhelming quality here. Hearts of Iron IV is the sort of game that requires real thought and that you’ll enjoy pondering even when you’re not playing it.

Hearts of Iron IV is a strong contender for the title of ultimate armchair-general game. The biggest problems I can point to are almost all performance-related, putting a slow, frustrating finale on what is otherwise an ingeniously detailed strategic stimulation of just about every aspect of 20th-century global warfare. I long for a way to extract more meaningful, personal stories and tactical feedback out of the hundreds of battles, but rarely did I ever feel like I was lacking for some weighty decision to make or interesting puzzle to put my mind to. This one’s well worth the extensive time investment required to learn how to manipulate its myriad moving parts into a well-oiled engine of war. Hearts of Iron 4 wields complexity like a swift armor division during the blitzkrieg, allowing it to serve the idea of layered, cerebral, strategic warfare instead of letting it needlessly bog down the experience.

This Hearts of Iron 4 Cadet Edition includes the following:

This Hearts of Iron 4 Colonel Edition includes the following:

This Hearts of Iron 4 Starter Pack includes the following:

This Hearts of Iron 4 Ultimate Bundle includes the following:

Hearts of Iron 4 Man the Guns

Hearts of Iron 4 Man the Guns comes with new alternate history paths as well as the ability to design your own ships and refit older models.

Hearts of Iron 4 La Resistance adds new options for resistance movements to the game along with secret agents and espionage missions.

Hearts of Iron 4 Waking the Tiger

Hearts of Iron 4 Waking the Tiger includes national focus trees for China with modified trees for Germany and Japan.

Hearts of Iron 4 Death or Dishonor

Hearts of Iron 4 Allied Speeches Pack activates when some certain in-game conditions are met. Comes with 70 minutes of speech and 13 total speech excerpts plus 10 more speeches from Allied nations leaders.

Hearts of Iron 4 Together for Victory

Hearts of Iron 4 Together for Victory focuses on the British Commonwealth nations which are Canada, Australia, New Zealand, The Raj and South Africa. Alternate historical paths are added and a new autonomy system with changes to lend-leases and technology sharing.

Find all the best prices for Hearts of Iron 4 DLCs on Allkeyshop!

Great RST,I played as muck time i can,and no end with it.

Great game, very difficult to master. Hoping in a sequel.

By the looks of it the cheapest place to get it is G2play, but that might change soon!