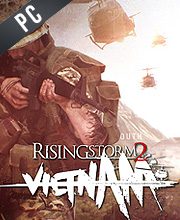 It's a digital key that allows you to download Rising Storm 2 Vietnam directly to PC from the official Platforms.

How can I find the best prices for Rising Storm 2 Vietnam CD keys?

Allkeyshop.com compares the cheapest prices of Rising Storm 2 Vietnam on the digital downloads market to find the best sales and discount codes on trusted stores.

Rising Storm 2: Vietnam is an action, indie, simulation video game. Developed by Antimatter Games and published by Tripwire Interactive. This is the sequel to PC Gamer’s 2013 ‘Multiplayer Game of the Year’ – Rising Storm 2.

Relive the Vietnam War with Antimatter Game’s authentic recreation of it. This brutal first person action will let you experience authentic gameplay of that era. It composes of automatic rifles, man-portable grenade launchers as well as modern weapons.

Huge, open level maps will include authentic locations in Vietnam like cities, rolling hills, rice fields, US Firebases, plantations and their famous jungles plus so much more.

New game types will also be introduced in the game. It will still include the original territory control mode and in addition to this will be smaller modes and maps. The smaller modes will prove to be more competitive. The regular gameplay can offer up to a 64-player gameplay. Battling as US Forces versus the Vietnamese.

This time enhanced communication tools will be available. This will help you work better with your group.

Class ranks, weapon upgrades and unlocks will not be available. Because the game will be focusing on the player’s skill and balance.

Choose your path! Will you play as the United States Military or the Vietnamese Resistance Fighters.

Be the first one to write a review about Rising Storm 2 Vietnam !

This is an absolutely great and fun game. BIG learning curve though for new players, if you’re used to COD and BattleField, this game will bust your balls at first. It’s not that complicated so you’ll probably get the feel of it after your third or fourth game. It’s one of the those games that easy to learn, but hard as all hell to master.

This has been on my to-play list for so long. Plan to buy this

it looks like a great first-person shooting game with a lot of different weapons. Can’t wait to play it.