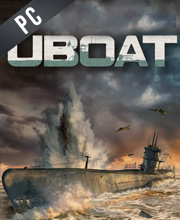 What is UBOAT CD key?

It's a digital key that allows you to download UBOAT directly to PC from the official Platforms.

How can I find the best prices for UBOAT CD keys?

Allkeyshop.com compares the cheapest prices of UBOAT on the digital downloads market to find the best sales and discount codes on trusted stores.

UBOAT is an action, simulation, strategy video game that is developed by Deep Water Studio and published by PlayWay S.A.

This submarine simulator game will bring players to the WW2 era. The game offers crew management mechanics having the primary theme as the life of German sailors.

You must control the crew in order to control the boat. Part of the things that you must take note of is the crew’s physical and mental health. Make sure that none of your sailors are hungry, tired or with low spirits.

An extensive damage system will be experienced in the game where the received damage can create unprecedented situations due to its effects. You must stay calm and be creative in solving the problem.

Your management skills will come into play when you ration your resources optimally. But if worse comes to worst, you can ask the help of allies or loot the wreckage of enemy ships.

Complete your missions from the Kriegsmarine headquarters and get rewarded. Use this to upgrade your boat by buying new equipment such as sonar decoys, torpedo types, and many more.

UBOAT offers an accurate simulation that is realistic but will never come at the cost of the quality of gameplay.

STEAM CD KEY : Use the Steam Key Code on Steam Platform to download and play UBOAT. You must login to your Steam Account or create one for free. Download the (Steam Client HERE). Then once you login, click Add a Game (located in the bottom Left corner) -> Activate a Product on Steam. There type in your CD Key and the game will be activated and added to your Steam account game library.
STEAM KEY ROW : It means for Rest Of the World countries which are not concerned by the region restrictions. This product can't be purchased and activated in Several countries. Please read the store description to know the full list of countries which are concerned. Use the key to Download and play UBOAT on Steam.
EUROPEAN STEAM GIFT : It’s a steam gift for Europe which requires an European IP address to activate and to play UBOAT on Steam. Read carefully the store description about region and language restrictions.
STEAM GIFT : A Steam gift is a one-time transfer you receive. You activate and install UBOAT to play on Steam, it is a non-refundable game that stays in your Steam games collection. Please read the store description about any language or region restrictions.
GOG.COM CD KEY : You need to register on Gog.com, then use the GOG Key to download and activate your game to play UBOAT.
Early Access CD Key. Play before the release date.
Bundle. Read the store description to know the content.

Be the first one to write a review about UBOAT !