15 of the Best Pixel Art Games and Compare Prices

“You want to play a Pixel Art Games, but don’t know which one to choose?

Luckily Allkeyshop is here to help you with this top 15 of the best Pixel Art Games!”


Take on the role of Skul and save the castle and your fellow demons from destruction in this colorful, side-scrolling roguelike. Level up, unlock abilities and use skulls to improve attack range, speed and power. Take on powerful enemies, face-off against massive bosses, and hunt those that mean to destroy you.

Rescue the members of your clan by defeating powerful bosses and Dr. Progen’s ruthless army. You can dash, leap, wall slide, parry, double jump, and cross slash. Unlock permanent skills and abilities and rage through the war machines standing in your way.

Explore and expand in a quirky 2D open-world where you will gather, manage resources, farm, solve puzzles, and craft to reach the goals set by you and only you. During the game, players will unlock more than 50 skills to increase industry, economy, foraging, and magic. Forager has more than 30 tools, more than 40 accessories, more than 60 materials, more than 20 food items as well as plenty of artifacts, seals, scrolls, and potions for players to discover and master. There are four dungeons available in Forager, each with their own enemies, bosses, items, and secret rooms to discover.

Build and manage your very own medieval graveyard while expanding into other ventures and finding shortcuts to keep costs down. Gather resources, craft items, utilize corpses for other means, explore dungeons, and make questionable decisions that will have long-lasting effects on the nearby village.

Discover an epic journey of eight characters, each with unique stories and side quests, as they battle monsters and destiny to fulfill their potential. Utilize abilities, skills and talents, and destroy your enemies by targeting weak points in refined turn-based combat.

Hack your way through a fast-paced top-down rogue-lite with a focus on player choice and experimentation. Fight your way through procedurally generated cities, choose whether to kill or let live, defeat an intelligent AI, and use dozens of whacky items and weapons. Make the city yours and smash your way through hundreds of hours worth of challenges however you choose to.

Leave your shop behind and become the hero you were always destined to be, and begin your journey of self-discovery and fame. Fight powerful enemies, defeat bosses, collect loot, sell the items in your store, and use the money to upgrade your business and recruit assistants. Craft items to aid you, befriend new companions, and make life and death decisions. Being a hero is more than just a state of mind.

11. There Is No Game: Wrong Dimension

Play a game that isn’t a game and re-discover the love for point and click adventures in this unique, bug-filled comedy game. Discover a remarkable game that promises laughter, tears, puzzles, unique characters, surprises, and a lack of gameplay in this beautifully designed indie game that currently sits on “Overwhelmingly Positive” on Steam.

There Is No Game: Wrong Dimension System Requirements

Battle your way to Eden in this fast-paced strategic card game that combines deck-building with real-time action. Customize your deck with hundreds of spells and items, and cast powerful spells to defeat epic enemies. Fight alone or with a friend in co-op mode.

One Step From Eden System Requirements

Hack and slash your way through endless hordes of enemies and drive your family of heroes forward through procedurally generated dungeons. Level up your family, swap out members of your party between runs, unlock rewards and upgrades, and make the ultimate sacrifice alone or with a friend to stop the corruption plaguing the land.

Fight for survival and battle it out across procedurally generated levels that span across dimensions. Every playthrough is unique, the enemies adaptive to you, and the challenge brutal. Unlock heroes, equip dozens of items and upgrades, and learn to counterattack in a reactive turn-based system.

Talk to elves, orcs, mermaids, and many other fantasy races in a coffee shop set in a modern world. Explore various storylines through the way you decide to serve your customers. Talk with a background of jazz and lo-fi music.

What is a Pixel Art Game? 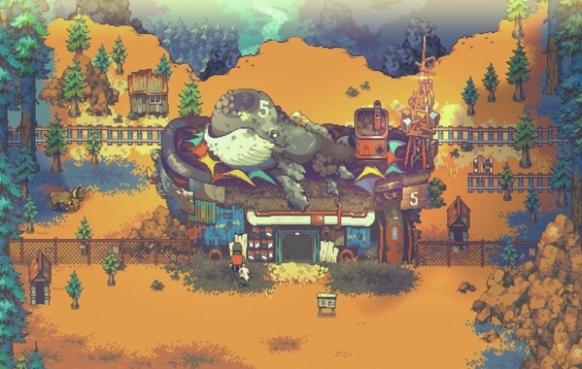 In most pixel games, the color palette is limited in size, with some video games only using two colors.

Why Are We Doing a Top 15 Pixel Art Games List?

Pixel Art Games are available at incredible prices, but with so many to choose from, we want to help you pick the game that’s right for you.