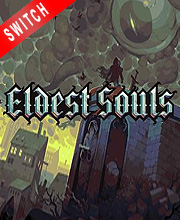 It's a digital key that allows you to download Eldest Souls directly to Nintendo Switch directly from Nintendo eShop.

How can I find the best prices for Eldest Souls on Nintendo Switch ?

Eldest Souls straddles the line between frustratingly difficult and overwhelmingly satisfying. I had to stop playing before bed because I’d have trouble sleeping from the nervous tension it caused. Whether that’s appealing or not is up to you, but for me, I eventually found my way around to really digging Eldest Souls.

Eldest Souls is a frantic and tough boss-rush experience that features slick combat, entertaining battles, and a beautiful yet desolate world to explore. Basically, it’s everything you’d expect from an indie Dark Souls title, which is exactly what it wants to be. It’d be a discredit to say that Eldest Souls doesn’t find its own ways to innovate though, with the Bloodthirst system and deep upgrade mechanics offering some cleverly implemented ideas that complement the gameplay.