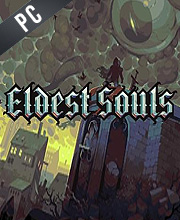 What is Eldest Souls CD key?

It's a digital key that allows you to download Eldest Souls directly to PC from the official Platforms.

How can I find the best prices for Eldest Souls CD keys?

Even as the death count just keeps racking up higher and higher. It’s one thing to craft a game with such an entertaining yet punishing series of fights. It’s another to do so with the kind of design philosophy that’s so quick to convince it more than deserves its rightful place. But that’s exactly what Fallen Flag has achieved with seemingly impeccable ease here.

There are some problems in Eldest Souls, including weird pathing to certain bosses that require trap-dodging, which just feel out of place. Additionally, the lack of a true pause means re-speccing may require a return to a previous checkpoint. These are ultimately small gripes for what is a wonderful experience overall, as Eldest Souls is a challenging but fair boss-rush with great pixel art and some smart New Game+ content.

Zoom 1m 3m 1y All
Track product
GOG.COM CD KEY : You need to register on Gog.com, then use the GOG Key to download and activate your game to play Eldest Souls.
EU STEAM CD KEY: Requires an EUROPEAN IP address or you must activate it with a VPN (Virtual Private Network) in order to play Eldest Souls. Might have languages restrictions or language packs. Read the description on the store game page to know if the EU IP is only needed for activation or for playing also (maybe on EU Servers). Most of the stores offer you their help, or show you how to do this with a tutorial to follow.
EUROPEAN STEAM GIFT : It’s a steam gift for Europe which requires an European IP address to activate and to play Eldest Souls on Steam. Read carefully the store description about region and language restrictions.
STEAM GIFT : A Steam gift is a one-time transfer you receive. You activate and install Eldest Souls to play on Steam, it is a non-refundable game that stays in your Steam games collection. Please read the store description about any language or region restrictions.
STEAM CD KEY : Use the Steam Key Code on Steam Platform to download and play Eldest Souls. You must login to your Steam Account or create one for free. Download the (Steam Client HERE). Then once you login, click Add a Game (located in the bottom Left corner) -> Activate a Product on Steam. There type in your CD Key and the game will be activated and added to your Steam account game library.
STEAM KEY ROW : It means for Rest Of the World countries which are not concerned by the region restrictions. This product can't be purchased and activated in Several countries. Please read the store description to know the full list of countries which are concerned. Use the key to Download and play Eldest Souls on Steam.
Standard Edition
Compare Choose & Buy Download (772)