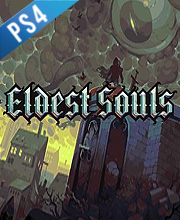 It's a digital key that allows you to download Eldest Souls directly to Playstation 4 from PSN (Playstation network).

I think it’s a boss-rush game with Souls-like aesthetics because, in terms of gameplay, the only real similarity with the Dark Souls franchise is the fact that it’s a difficult game with a stamina bar, boss fights, and a focus on dodge mechanics. Consequently, it’s also why I feel if you’re looking for a game similar to the Soulsborne games, Eldest Souls may not be your cup of tea. But hey, if you’re a fan of boss rush hack-and-slash games, why not give it a try?