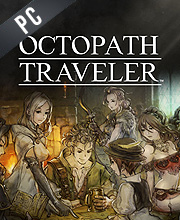 What is OCTOPATH TRAVELER CD key?

It's a digital key that allows you to download OCTOPATH TRAVELER directly to PC from the official Platforms.

How can I find the best prices for OCTOPATH TRAVELER CD keys?

Allkeyshop.com compares the cheapest prices of OCTOPATH TRAVELER on the digital downloads market to find the best sales and discount codes on trusted stores.

Explore the wide and amazing world of Orsterra on an epic adventure while learning about the fascinating lives of all eight of the travelers.

While I do wish that Octopath had a bit more off-the-wall ambition the fact is that it definitely accomplishes what it set out to do. They really don’t make games like they used to, and this is the most playable old-school JRPG I can remember in forever. The turn-based combat is very engaging, as are the soapy stories. The style is confident, from the music to the character designs, to the lighting and motion blur, this is a game that knows what it is about. And while some of the writing and voice acting stumbles in places, that’s kind of part of the charm. For good and bad, Octopath Traveler evokes the games of the past, and for a lot of us, we miss the bad as much as we do the good.

Octopath Traveler has many little and big pros. Its ‘HD-02’ visual style is beautiful; the music is great; the world is very big, non-linear, and full of things to do; the characters can be customised in many different ways; and, finally, the combat is fast, yet tactical, simple, yet deep. Octopath Traveler is great. However, it also has a couple of cons that for many people will be the deciding factor of whether they should play this or not, and these are, the almost non-existent interaction between its eight characters, its somewhat… artificial vibe, and the lack of a decent main plot.

Zoom 1m 3m 1y All
Track product
EPIC GAMES KEY : Region Free / Worldwide. Requires Epic Games Launcher App in order to play the game. You need to create a free account here in order to download OCTOPATH TRAVELER from Epic Plateform . Read the description on the store page about any language or country restrictions.
EU STEAM CD KEY: Requires an EUROPEAN IP address or you must activate it with a VPN (Virtual Private Network) in order to play OCTOPATH TRAVELER. Might have languages restrictions or language packs. Read the description on the store game page to know if the EU IP is only needed for activation or for playing also (maybe on EU Servers). Most of the stores offer you their help, or show you how to do this with a tutorial to follow.
EUROPEAN STEAM GIFT : It’s a steam gift for Europe which requires an European IP address to activate and to play OCTOPATH TRAVELER on Steam. Read carefully the store description about region and language restrictions.
STEAM GIFT : A Steam gift is a one-time transfer you receive. You activate and install OCTOPATH TRAVELER to play on Steam, it is a non-refundable game that stays in your Steam games collection. Please read the store description about any language or region restrictions.
STEAM CD KEY : Use the Steam Key Code on Steam Platform to download and play OCTOPATH TRAVELER. You must login to your Steam Account or create one for free. Download the (Steam Client HERE). Then once you login, click Add a Game (located in the bottom Left corner) -> Activate a Product on Steam. There type in your CD Key and the game will be activated and added to your Steam account game library.
Standard Edition
Compare Choose & Buy Download (791)

Really hoping for a price drop, the game looks amazing can’t wait to give it a try!!

Great looking for the neo retro graphic style game, with a little list of prices for now. waiting…
HF

OCTOPATH TRAVELER is nice price for this game. Good trailer.

Surprising this isn’t discounted on Steam sale but this is an opportunity for resellers if they can move in!

Great looking JRPG, though it’s way too expensive for what it is.. Still want to play it though.