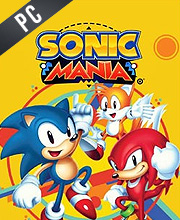 What is Sonic Mania CD key?

It's a digital key that allows you to download Sonic Mania directly to PC from the official Platforms.

How can I find the best prices for Sonic Mania CD keys?

Allkeyshop.com compares the cheapest prices of Sonic Mania on the digital downloads market to find the best sales and discount codes on trusted stores.

Sonic Mania is an action adventure side-scrolling video game. It is developed by Christian Whitehead, Headcannon, and PagodaWest Games. It is published SEGA.

Sonic Mania is here! To celebrate the series’ 25th anniversary, the old and new will emerge in this game. Great 2D graphics will wow you as well as the remastered and new stages. Choose from the three iconic characters in the game: Sonic the Hedgehog, Miles “Tails” Powers and Knuckles the Echidna.

There are several acts in the game to go through and defeat Doctor Eggman’s newest henchmen called the “Hard-Boiled Heavies” and eventually Doctor Eggman himself.

As with the previous games, golden rings are still available to be gathered. So, you’ve got to collect them all.

Either you play alone or with your friends, Sonic Mania is sure to provide a great new adventure.

Be the first one to write a review about Sonic Mania !

this game is easy for the children it’s amazing game

I loved sonic cartoons and these 2d games are good. I enjoyed them